Maiden encounter of the city

“How was Beijing?” has been the most frequent question posed to me in the course of last week. Well, I must say I enjoyed my trip a lot. You may not like the people for their rude and often unhygienic antics, but I would consider Beijing as a city that one should not miss.

Upon landing, I was greeted with a first glance on Chinese efficiency. Initially, there were only 2 counters opened at the immigration checkpoint for foreign passport holders. Within minutes, there were officers appearing from nowhere and suddenly, all counters were operational.

I kept track of the time. We landed at 6.30am (thank God for MAS and on-time flights)… me and Jules got out from the plane, settled immigration, collected our baggage and got into the taxi… all before 6.50am. I find that quite amazing.

The hotel we stayed in was fantastic. If there’s anyone heading to Beijing, drop me a mail and I will tell which hotel it is. They allowed us to checked in at 7.30am and we had a nap till 11am before beginning out adventure. 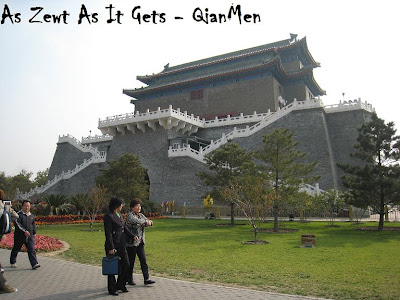 Our first destination… Qianmen, which means “Front Gate”. It’s located to the south of Tian’anmen Square. By the way, Chinese are obsessed with the 4 winds. If you are heading there soon, bring a compass.

And to the north of Qianmen… Tian’anmen Square. 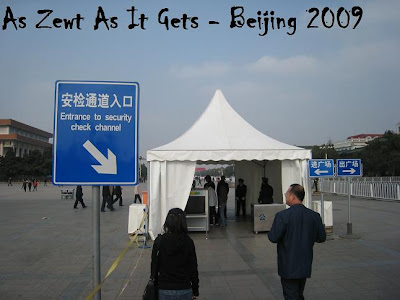 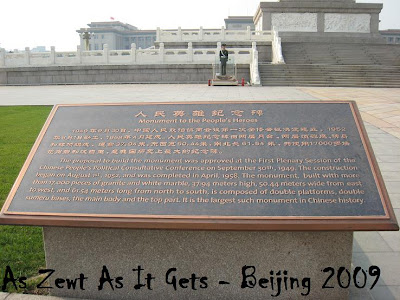 Nothing overly spectacular except the fact that they have security checkpoint for every entry. They x-ray all your bags. X-ray machines are also located at the entry of all subway station. I was stopped a few times because I had my tri-pot in my bag. They thought it was some kind of weapon.

To the north of Tian’anmen, it’s the great Forbidden City. 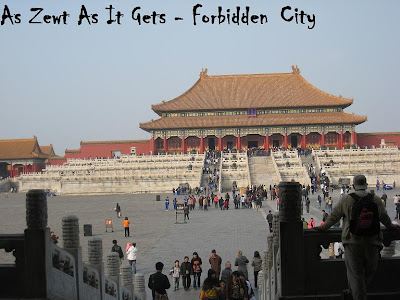 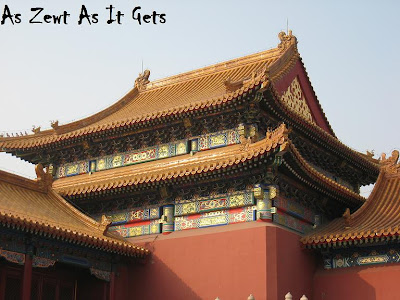 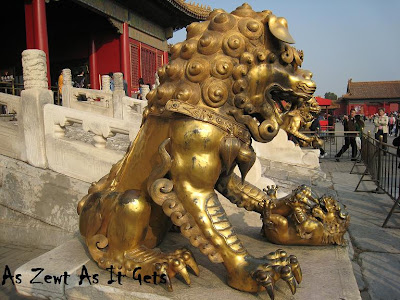 I think the Forbidden City has gone through quite substantial restoration work, which made it more magnificent. It is truly a structure of ultimate Chinese grandeur. It is always a great feeling to see ancient monuments such as these. It really makes you wonder, how in the world do they manage such feat without modern technology. The amount of thinking involved is just too mind-boggling.

We didn’t manage to cover the whole city. It was just too big, and just too much walking to do.

We went to the National Centre for Performing Arts a.k.a. The Egg. You have to pay to go in and I think that was a mistake. Nothing to see inside structure and so, if you do go, there is no need to go inside. 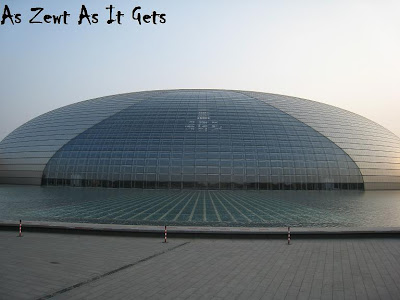 We went to a nice Sichuan restaurant for dinner. Let’s save that for food post, shall we?

2 years ago… What would you do?
A zewtpinion by zewt at 9:28 pm
Email ThisBlogThis!Share to TwitterShare to FacebookShare to Pinterest
Labels: Beijing tales, Zewtravel

I'm really interested to know which hotel allows you to check in at 7.30am! So cool. But cab fares in Beijing are relatively cheap, don't you think? When I was there early this year, going around Beijing seldom had me paying more than RMB10-15. And I do remember those security checkpoints at Tiananmen. Plus, I had difficulty reading Chinese words so I didn't even know that place I went was Qianmen, until I saw your picture! *LOL*

oh... i miss beijing... i have friends living in beijing.. so i dont need hotel =p

Your visit sounds great... I too marvel at ancient architecture... would love to check out China for the terracotta warriors as well as the great wall. Someday I will...

I also think it's one of the must see places in this world. I hope to go one day, but I have so many other destinations in mind beofre Beijing :)

Did you have the feeling anyone spying on you on the streets? Like their secret service? After all, you're a critical man :P

Just came back from 16-days private tour of China. 4 of us from 55-65 years old, 2 no speak Chinese, and the other 2 half pass 6 Chinese, 1 ear not good, and another eye not good. I was the oldest one speaking some Chinese and would definitely not have gone if I have these facts earlier.
We took Airasia to Chengdu, visited Chongqing, Guiyang, Guilin, Xitang, Shanghai and return to KL from Hangzhou. We have travelled in day train, second class and first class night train, Shanghai's maglev, day bus, double levels sleeping night bus, taxis, small mianbao (bread shaped) van, clean new government official cars, etc. Transportation efficient, buying tickets simple. Stayed in back packers inn, China's 2-star chain hotels, 5-star hotels, old heritage hotels. If rooms available can check-in anytime before noon. Chain 2-star hotel, checkout at 2pm and store luggage at no extra charge, computer with internet free at lobby. Twin-bed, attached bathroom, air-con, internet connection in room less than 100 ringgit.
We went to places that locals go including their markets, libraries, museums, parks with and without lakes and streams. Ate lots of delicious fruits, nuts, local dishes and very generous feasts from government officials.
No incident of being cheated, streets are definitely safer then in Malaysia. People do not hang on to their handbags. At all eateries, the handbags/computer bags were just left next to the seat.

I was 1 inch close to go to Beijing Big Egg to watch Glay's concert. Sigh.... Now I can only see its photos from your blog.

of course they had to check out your tripod. once upon a time, violin cases were meant solely for violins, but the mafia changed all that!

haha. The Egg- nice outside, nothing inside. sounds like most people i know (?)

Lovely pictures! You guys going to the Great Wall too? That's on my list.

@ the efficiency bit - That's what so easily sets them apart. To be fair, to my surprise, this time when I traveled I found the immigration officers in the US and in India extremely efficient too.

it's been 9 years since i was last in beijing. looks like many things have changed (like the place got efficient) and many others have not
(like filthy habits)

iamthewitch - yeah, i was surprised. and the hotel is pretty full!! drop me a mail and i will let you know.

fufu - haha! good for you. you must have friends all over the world for that much of travelling.

terra shield - terracota warriors are located at a different place. would love to see that too. great wall coming right up.

MKL - hahahaha... i think the chinese govt would be pleased with what i have to say about them.

may ling - wow... sounds like a really adventurous saga for ppl your age (no offence). yes, i feel china is very safe. nothing compared to here.

constantly craving joe - not really. this hotel is full all the time it seems. ppl checkin in non stop.

doc - hahaha... and my tripod can be used as a weapon too!

j_yenn - let's call them egg then.

missironic - go there and visit ler.

rashikaps - been to great wall already, pictures coming soon. US and india efficient? i am least surprise.

sinlady - hello and welcome! yes, that filthy spitting habit is still there.

Wow, the architecture is indeed magnificent and The Egg looks like the La Ciutat in Valencia!

You are right, I think Beijing is a city worth visiting, although I've never been there before, but definitely will. Will certainly get travel advise from you.

So which hotel is that?

siew - time to save up and yes, would be happy to advise.

beijing has 300 yrs of history while xi'an has 3000 yrs (let's not talk about shanghai), that's what I was told. the sights of great wall and terracota warriors still amaze me whenever I look up the pics I took!

^
Beijing is a LOT older than that for sure. The Forbidden City itself is built 6 centuries ago so this 300-year-old theory is nullified. And Beijing is known as one of the Four Great Ancient Capitals of China (the other being Nanjing, Luoyang, and Xi'an), and it has been a capital of various Chinese dynasties (in alternate times) for 2k years.

whoalse - looks like xian will be my next destination... :)

kyh - definitely more than 300 years. it is a wonder how wooden structures of old still stand today.

I find the architecture of the Temple of Heaven absolutely breathtaking, even if I'm just viewing it from the pictures! I heard no nails were used in the construction of this remarkable timber structure. I'm sure you didn't give this Beijing landmark a miss!

kyh - actually, forbidden city, temple of heaven and summer palace were all constructed without nuts, bolts or nails... it's truly an architectural wonder... of cos i didnt give it a miss... pics coming right up.