I guess it is already public knowledge that the High Court ruled that Nizar is the rightful MB. I can see the sheer joy exhibited by everyone in their respective facebook status update. But I think the early celebration may be mere premature. 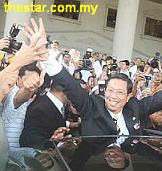 While almost every Tom, Dick, Harry, Mary, Jean, Jane together with the Ahmad, Arumugam and Ah Kau hope that the Sultan will dissolve the state assembly, the Sultan might just ask Nizar to wait till the next state seating…

Whatever it is, lets bask in happiness of this 'light at the end of the road'.

Man, what's with you and the M word?

Dude. Isn't the incoming MB and his cronies suspended by Sivakumar? Since Nizar is still the MB, the suspension stands. Therefore, even if there was a vote, BN dun have the numbers. Dat was the whole purpose of the suspension in the 1st place.

I think Nizar will quickly call for the dissolving of the state assembly and call for fresh elections. And if I were him, I would fire some of the assholes that went against him, especially those that prevented him from entering his office, etc. It's pay back time! :P

still i have some reservations. let's hope Sultan/Regent do the right thing. Some comments in the blogs said Sultan has to choose between daughter and Perak. Sigh~

Hello...thanks for the M'sian politics update. Still not over yet ah all this drama???

I got an email about LKT and etc wanting to stage some other thing.

Gosh...if I'm so confused about what's happening in my own country, I wonder how others feel?

Fi-Sha - and the light turns out to be the headlight of an on-coming train.

Dan-yel - hehe... i just had that sudden burst of inspiration.

adrian - he moved too slow.

CK - and our reservation is correct.

I have a question. If they are going to table a no confidence motion against MB Nizar, why didn't they do so long time ago? Was it because of the suspended DUN members?

Ulquiorra - i think they sort of overlooked this point. all they did was getting the 3 frogs to declare that they no longer favour PR, then head to the palace and get the Sultan to remove Nizar. Little do they know that there was actually a precedent case.