When the local dailies whose usual modus operandi is to tone down big stuff to avoid panic actually said that it could be as big as the one which killed 40 million, you know this is big. And I can't help but wonder how capable our govt in dealing with big things.

I am referring to the apparently imminent swine flu pandemic. The World Health Organisation has already raised alert level to phase-5. 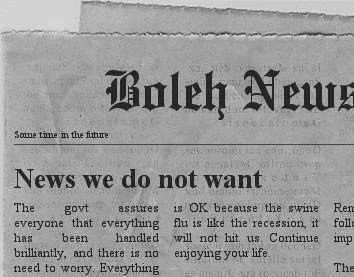 If a pandemic does happen, I think it will truly be a big test for the govt. The “Malaysia Boleh” way of doing things, which can sometimes be a mockery to intelligence, may just be a matter of life and death in this situation.

Then again, I can just be over-dramatic here. But if I am right…


2 years go… The chronicles of morons
A zewtpinion by zewt at 9:45 pm
Email ThisBlogThis!Share to TwitterShare to FacebookShare to Pinterest
Labels: Boleh-logy, Health, In the news

I am not against school sports. I know that so many of our kids are obese and need activity. Sports teach our kids how to follow rules and to work as a team. They learn a lot from sports. It is when other programs are cut, too easily in my opinion, to afford bigger and better stadiums and weight rooms, that I take issue.

Actually I am quite confident that the government will be doing everything that they can to prevent an epidemic. Especially if they knew beforehand of how dangerous it could get.

There are many Malaysians out there who are really capable, know what their responsibilities are and could perform well beyond expectations when required to. Problem is most of them are hidden behind curtains of red tapes and bureaucracy.

Take the case of the Nipah virus outbreak as an examples. Its one of the most dangerous virus out there with a mortality rate of more than 50%. Yet a previously unknown and humble doctor was responsible in discovering this new strain of virus. He has risked his own life in order to save many other lives.

Since we have warnings of whats coming, I bet that this outbreak will be brought under control if it ever gets into Malaysia.

Btw, the doctor mentioned above is Dr Chua Kaw Bing. Ironically I don't remember any local media reporting about him. The first time I heard of him was on Discovery Channel.

I think that Msia has had quite a bit of experience in outbreaks. Let's consider SARS, nipah virus, JE, H5N1, etc. If they still do not know what to do then they have failed to raise themselves from the numb-nut level to the 'I have an idea what to do' level.

I got news of the level 5 alert 1/2 a day b4 the announcement. Gov trying to slow down the news? Hmmm... Aust also ran out of vaccine quite early in the outbreak too. This after claiming they had sufficient. Pride comes b4 a man falls. Muahahaha!

I think Malaysia can handle the situation quite well. But of course, it still remains to be seen : )

For once, I think the government will take this seriously.

And if someone is really infected, he or she will not want to opt for the "settle sini" route and end up kicking the bucket in a few days.

leyaw - i certainly hope so. and about that doctor, it's a shamed he was over looked. that's the way we do things i guess. and i hate to say it... if it's another doctor, things might be different.

pinknpurplelizard - there is no vaccine ler. the aust govt already issued a statement saying the brisbane H1N1 vaccine has got significant difference and it will not work.

foongpc - let's hope i am wrong.