History was made today

History was made today. I remember whenever I watch movies featuring an African-American President; I always wonder if such things can ever happen. Well, it did happen after all; and I think it is a healthy change. I believe his presidency will have a bearing on the world and since we are part of the world, it will affect us somewhat. 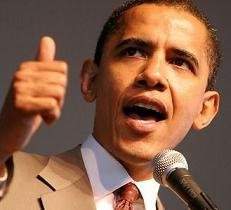 While America will soon welcome its first African-American President, will our country ever have a Prime Minister of… oh… I better not say it… some people might view it as seditious. That is how far we are compared to the world.

Having said that, a lot of things which people perceived will never happen have been taking place around the world. I believe this is a crossroad of not just for our country, but for the whole world… for humanity.

From a biblical perspective, I would say we are witnessing a time when “God is shaking all nations” as prophesied by the prophet Isaiah. I have been trying to relate all the events of the world to the book called Basic Instructions Before Leaving Earth and it has been intriguing. Perhaps I should write about my thoughts from that perspective next week…

For now, I will take today’s event as a sign of hope. Things you perceive to be impossible today might just be possible tomorrow. As someone said to me over facebook… who knows… we might just have an African-Malaysian Prime Minister…

Now, that would be something, isn’t it?
A zewtpinion by zewt at 10:15 pm
Email ThisBlogThis!Share to TwitterShare to FacebookShare to Pinterest
Labels: In the news

An African-Malaysian Prime Minister..? Cool. How about Zewtian P.M, any? :0

To think Obama once resided in Indon... so near to us ler.. hahah

You should listen to his speech, he thanked everyone for the success because it's because of the people that he's there. In Malaysia.. better not continue.

humanity is maturing; we all very lucky to live through these interesting time.

Martin Luther King jr's "I have a dream" did come true.. it only took them 232 years to make history.

I hope during our lifetime we may see it happen on our soil sooner..

i was emotional when watching his acceptance speech. i admire his talent, his strengths and his ability to slowly, yet steadily climb up this battle hill.

actually, i have no feel at all. it is good that history is made in America but i wouldn't make too much out of it.

as to you know what possibility in Malaysia, note that America took more than 200 years to elect their first black president. that is also premised on freer and fairer election...:P

Did u guys manage to catch John McCain's speech congratulating Obama after the election? He's such a wise, honorable gentleman. I wonder if our government or BN did come out with an honorable speech to congrate our oppositions for winning Selangor, Penang and Perak. I guess not.

ps: zewt, i'll try to get ur banner done soon. uni has been heaps busy and i'm kinda busy setting up my own business at the moment. go check it out http://www.nicholbrooklyn.com
it's my photography business based in Adelaide, South Australia

hahahah u know that'll be an interesting change! i met this african guy in club med n he was really friendly!

maybe next time, Hispanic-American or Japanese-American will make it to the White House?

The win certainly inspire many hopes. We certainly hope that change can happen to the way we look at ourselves. If somebody had the dream to get to Perdana Putra, we better start looking at him not on his skin, but on what he is capable of.

anyway, Lim Kit Siang already did that 'so called' seditious remark by making it a blog post title.

looking forward to read on your say on Basic Instructions Before Leaving Earth - i've not heard of it but now i do :) I like reading up on prophecy articles and d only one book i have is Nostradamous

I like Mcain's gracious speech and the way he gently ticked off some of his supporters who booed at the mere mention of Obama's name (typically malaysian?). Obama's victory is just the 1st step and if change were to happen, he will need time (he said maybe not even in his 4-year term of office)...and the support of all including the over 40 percent who voted for Mcain. Hope he gets all that...but wasn't there an assasination attempt even before he started? Sigh...

I scoffed at what Mr Lah said as reported on the front page of The Star today.

But then... CONGRATULATIONS OBAMA! :D

Sivin Kit - hahaha... those 3 words have been immortalised!

lynnx01 - heard his father was of indon origin. well, a lot of ppl will try to make claims now.

ven - In malaysia.... they also thank the ppl. in a different manner of cos.

pavlova - we will now have to see if he is just another politician.

myop101 - the world accelerates nowadays... hope we catch the wave.... at least the floodgates are somewhat opened.

huei - RPK said project 916 is still alive and kicking. hopefully he is right.

Mohamad Hilman bin Nordin - well, i dont care if we have a malay or indian or a kadazan or iban as my PM, so long as he is a PM for everyone, for all malaysians.

lovegoddess - next week ok? it will be based on what i understand of cos...

day-dreamer - you listen to him ah?

Talking about connections...I think his brother in law is Malaysian. Naturalised American. Or something like that.

Zewt...all your photos on FB...why with your arms flexed waaaan? Showing off the biceps is it? ;-)

it is a historic day indeed. it is inspiring but the 44th president's got a long road ahead of him. ;-)

i don't think we should expect miracles from him but we should be hopeful that change will take place in US.

it took 200+ yrs for this evolution to take place but it shows that the democratic process can work...

Today the bugger said 'minorities' also can what. Biatch! Head of dept also cannot you wanna talk about PM ah??? Like we're that stupid!! He can say that now la cos he's out already what

It's not me to shed tears for trivial matters but his speech moved every soul and heard across planets.
A standing ovation from the universe citizens.

I do not know why you guys are so surprise that a black guy become (he is not mix so not all black) our president.

If you come to US via N.Y, you see the status of liberty. We are the land of the free.

We have actor for president (Regan), we have peanut farmer (Carter), we have oil tycoon (Bush) and now we have half black president, next you know my half Asian son will be next president and my native land Sarawak will have a public holiday like Kenya, right ?

I am happy that a black man become my president but I hate every value that he has. But, I will support my president regardless of our differences in value because I believe God is sovereign and HE is in control.

Thomas Jefferson was half black. How come he wasn't the first African American president?

I was a supporter of him all the way from his initial candidacy against clinton to his final victory. I was overwhelmed with joy!

As for m'sia's case, not in a thousand yrs.

Someone left a comment on fb saying,"Obama enters White House. What should it be called next? The Black House?"

Funny though,from my perspective, I am not really euphoric over Obama's triumph simply because he is the first African America to enter the White House, but rather, he symbolizes hope,that, there are good politicians out there who are sincere enough to serve the nation, rather than serve their own interests.

If you follow his autobiography, you just cannot help but admire this man, and wish that Malaysia may some day be blessed with such a leader.

Not many will know that when he was the Senator of Illinois, he forbid his staff, including himself to travel via private jet. This is to avoid exclusifying themselves from reality of everyday struggles of everyday people.

He understands the word "empathy", such a lonely word besides "honesty", they should make a song for it.

Having said all these things, we have yet to see the actions of his words, as we all know, that action is louder than words.

Amongst my favourite Obama Quote is "an economy that honors the dignity of work"...something we Malaysians have to work on, against cronism, against a bunch of politicians who are busy politic-ing instead of doing what politicians are elected to do, that is to run the people who got them there in the first place.

Beyond color, culture, religion, gender. It sounds idealistic because people create reality to make sure ideals die and impossible to exist. That is when, once in a while, we need a "hero" a champion in a form of leadership to guide us in our own ailing country..that is what hope is all about...and Obama reminds me of that hope..

This will never happen in Malaysia. If only we Chinese and Indians are not pushed to the limit, that will be a blessing already!

sabrina - and u believe him?

ummie - and we hope his passion will drive changes not only in america, but in the world.

jamy - dont call him a black man lah... :) well, i think it's just the euphoria of having a non white as president. i shall hope your son will be next :)

taxy driver - did he appear black though?

kyh - come one... switch your passion now to malaysia.

Jemima - thanks for your support... :P

pah nur - if what you said is right, then he commands respect of the world. yes, our nation has yet to witness such a leader. and it is our role to ensure that a leader of such stature is groomed.

faisal admar - for a while, i was on clinto's camp hehe...