Ben and Jen are of the same age and have been dating each other for quite some time. For some very strange reason, it was Jen who seemed to be afraid of committing to the relationship. She made it quite clear to Ben that she will only marry him when she reaches 30. Uncommon isn’t it? Not to Jen.

Uncommonly amongst the uncommon, it was Ben who wanted to commit. And so, at the age of 26, after dating for quite a number of years; Ben bought an engagement ring and planned a romantic marriage proposal. I shall not go into the details but needless to say, Jen turned him down. She reiterated that she only wants to tie the knot at 30. 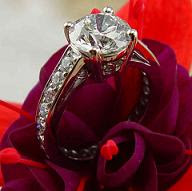 So Ben had with him a ring and a girlfriend who will not marry him for at least 5 years. What did Ben do?

Some may call it true love… Ben proposed to Jen every year, and Jen rejected Ben every year all the way till she was 29. Can you imagine… for 4 consecutive years, Ben will go on his knees… take out the ring (the same ring)… proposed……… and got rejected. Absolutely amazing…

2 years ago… From poll result to postcard and a study
A zewtpinion by zewt at 10:33 pm
Email ThisBlogThis!Share to TwitterShare to FacebookShare to Pinterest
Labels: Friday frolics, Use your juice, Zewt on Relationship

he waits for her to proposed to him? Hahaha.....

I think I'll asked her "Hey, u wanna get married or not?"

Hmm... he proposed to another girl? LOL.

That's very sweet. I think Ben believes that there's only one girl who's meant to be with him, only one. Therefore, he doesn't mind waiting at all...

He sold the ring and with the money, went on a sexciting holiday in Amsterdam! Hahahahahaha!

Ben would be an idiot if he gave up now.

After all the years, this is the final push.

What Ben did is right but how many are so faithful to not stray or wane along the 5 years? Actually was it practical or viable for them to get married at 26 if Jen accepted during the time?

But then, we all know that Bennifer never made it to the aisle.

Ben said ,' this is last time, if you dont marry me now Jen, I'm gonna marry your best friend Susan '

If I were Ben, I probably won't ask the 5th time *LOL. But anyway, is this a real story? Did Jen accept in the end? :o)

If Ben asks me now.I will say I do. Lol.

I guess... Ben found someone else?

i think ben asked jen to marry him again. because the title is "he asked 5 times"...

He proposed, and got rejected again, and Jennifer ask for another year. Ben got fed up and broke up with Jennifer.

I'll tell you how it ends...im always right.

Ben asked her and Jen married him. After a few years, Ben wanted to stick his stick into other women who was hotter than Jen. Lets face it...we men want to stick our stick into a whole load of women. And then came along a girl who wanted ben's stick badly. They had an affair and Ben realised that he loved her. So he asked for a divorce from Jen. Jen said no for 4years and was trying to revive their marriage out of sheer hope. On the fifth year, Jen finally relented. And that is why Jen commited suicide.

This is the law of what goes around will come around.

still remember my friend told me, if u want to smoke, start it early, end it early...
if u want to get into marriage, have it early,then when u found that he is a wrong person, u still can choose again.... after 30, if you found that she is not a correct person, as a guy, u still valuable to attract young ladies, for a women, u also still valuable to be other's mum, or to those young guy(cause those "good" guy already unavailable)..... i can't say that there is no love, but some time they tought it is love, but actually is just a dependent feeling to each other.... may be the last year, a young, cute girl shows interest to Ben, then Ben realised that actually Jen is better as a sister rather a wife, then he sold the old ring, and buy a new ring to proposed to the young girl... who knows?~

the world is changing, everyone is changing...realtionship, can break off.... marriage, can divorce...even, couple, can change partner ~|||

Aw, that's so sweet!
I hope it's a happy ending - Jen and Ben live happily ever after :)

Your blog is definitely worth the read. THanks for dropping by my blog. I am encouraged. Keep blogging! Let nothing or what others may say slow you down! :)

when Jen reaches 30, then Jen had to get a diamond ring and propose to Ben!

i'm so curious about the ending. what happened actually?

my guess: the guy gave up maybe? i mean. if a girl really wants to marry you. she will. it doesn't really matter how old she is. she rejected so many times. i guess the guy finally gave up.

leyaw - hahahaha.... wait for her to proposed... that will be quite hilarious.

suituapui - hahaha... one ring cant get your sexciting trip to amsterdam. maybe bangkok can lah

Miss Pharmacist - it was... he proposed and they are getting married. so when if your happy ending?

pinknpurplelizard - well, not sure if it was practical then... but guess for him to ask so many times, quite phenomenal.

hikazew - Jen shall say... i just agree to marry your cousin, Ken.

anon aka coreen - this is the answer that i have been waiting for... sharp...

Ah Siang - well... that seems more logical. however, in this story... there is fairytale after all...

The original anon - you really should write a novel man... hah!

K - so your conclusion is?

Petite Lass - happy ending it is :)

-eiling- - HAHAHAHAHA... or Jen will point a gun to Ben and asked him not to give up... nah... fairytale ending.

zthon - well, the title is supposed to be the greatest hint. only one person caught it.

Jen is plain funny in my point of view, it sure looks like some 18 year old girl thinking and doing...

based on what u tell about ben, he must be a very faithful and loyal hubby candidate. =D so worth to marry mah. About the looks and so... dat one decide later ahaha.

my conclusion~
if i'm a guy, i'll said get another ladies. if i'm a girl, i'll hope they together.... as just a listener/outsider, i hope they are together,毕竟，还是希望有情人终成眷属。。

Awww, what a strong lovely guy. Hopefully all goes well with him!

Thumbs up for Jen. Well.. for both la. Ben also can wait that long. Not bad. And Jen really fulfilled her words and not make him wait any further. hahaha..

Congrats to both of them! :D

Ben should have bought a bigger ring everytime he re-proposed lah (instead of using the same ring)... Then Jen would probably have given in on the 2nd or 3rd attempt LOL! :P...

awwww.. i m a sucker for happy endings!

we don't exactly know the whole story.. so, jen must have had her own reasons for wanting to marry only at 30 onwards..

and it's no everyday you get a guy so dedicated.. staying true and faithful not just in love but proposing every year??

this guy is for keeps!! hope they will truly have a wonderful journey in life together.. moving forward as husband and wife!!