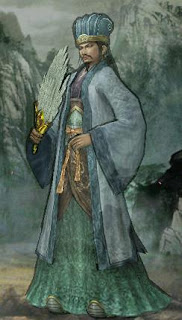 Oh No… my brother just told me that my all time favourite computer game, Romance of the Three Kingdoms version XI is out. All these while, the game has only been in Mandarin but RTK XI is now in English.

I just managed to install the game yesterday. The graphics are pretty incredible. But the tutorial suggests that it will take a while before I get familiar with the game.

Liu Bei… Cao Cao… Sun Quan… it’s all coming back to me. I might just be spending endless hours in front of the screen just like when I was in school. Sleepless nights… here I come!

P/S: A very big thank you to Pattirmina for awarding me Uber Amazing Blog award. Wow, it has been a long while since anyone gave me any award. Many thanks!

A zewtpinion by zewt at 10:33 pm
Email ThisBlogThis!Share to TwitterShare to FacebookShare to Pinterest
Labels: Growing Up, Personal

you are most welcomed!
you totally deserved it. =)

Whoa I can't imagine you being an computer game player... haha...

congrats on the award. now there's english version, i bet fans around the world would be happy.

zewt..the game has been out for nearly a year! lol. where have you been?? you haven't been wawlking around lowyat plaza recently?

Harh... Zewt!
U r so mean!!! Tempt me like dat during my exam period. *steals the game from zewt and run*

Dear Zewt,
Congrats bro on another award to a long list of yours...Im so glad i stumbled upon your blog!

hehhehhee men would always be boys kan Zewt? Have fun with the sleepless nights...

pattirmina - must still thank you nonetheless... :)

day-dreamer - hahaha... a boy will always be a boy.

cindy khor - yup... i am telling all my rtk kaki... they are all going to get sleepless nights too.

Fi-sha - we can never lose the boy-ness in us :P

You should be spending sleepless nights with Jules. :P

The game is fun, and I lost some sleep over it. But it gets to be a pain in the ass if you over micromanage :P

And I can't overstate the importance of getting someone with the "Wealth" specialty. Money counts :)

Aiyo, what coincidence. Just watched part 2 of John Woo's "historical" adaptation of one part of this very popular novel - the Battle of Red Cliff, only yesterday nite when i read your post. Have you seen the films yet?

The first part was quite good. But i have to say the second does not live up to expectation. i don't like the ending at all. Haiyah, too much like a modern day standoff. Guess that's the case with most of John Woo's films.

Tony Leung's 'Zhou Yu' is also not forceful enough. Liu Bei seems too soft. Sun Quan does not have enough screen time. Liu Bei's sworn brothers, Guan Yu and Zhang Fei only played minor roles in the film. Only Takeshi's 'ZhuGe Liang' and Zhang Feng Yi's 'Cao Cao' could be considered good. Overall, not a good conclusion to the whole film. Enjoy your game then...

jemima - that goes without saying :P

Klaw - i am STILL learning how to play it. sigh... felt so slow.

joshua wong - yeah, i think the second part was not as good... the first part raise our hope for the second installation. sad to say... failed to deliver. but nonetheless... it's a good watch. it's like china's respond to lord of the rings.