Whose clock is ticking?

To me, he has really taken things to the limit. I sat down and thought to myself, what would he gain if he were really bluffing? Absolutely nothing. Does that mean we can believe him? And I wonder why the sudden change of portfolio between Badawi and Najib?

Whatever it is, time is running out and if there are a few more such NATO gatherings and NATO press conference, I believe many, in true Malaysian fashion will begin to turn on Anwar. 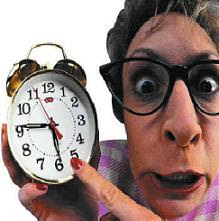 The clock is certainly ticking, but one would ask…. Whose clock?

Just to digress a little, Alternate Investment Group (AIG) is also currently under distress, joining the likes of Lehmann Brothers and Merrill Lynch. With this and our wonderful political blockbuster, our stock market is going to have a wonderful diving trip. Time to pick up some cheap blue-chip counters perhaps? I most probably will.

And by the way… crude oil hits below USD90 per barrel lately… when is petrol going to come down!!!???

P/S: For those who don’t know, NATO = No Action, Talk Only.
A zewtpinion by zewt at 12:13 am
Email ThisBlogThis!Share to TwitterShare to FacebookShare to Pinterest
Labels: In the news

Defence Minister has better power to "control situation". Even to stop the clock too.

agree that it's a good time to pick up blue chips.
NATO truly.
but u r right that it's funny that dopey is now DEFENCE minister.
gee, kaboom man.

At this moment, I still won't bet against Anwar. And true our economy is under serious threat, we have gotta do something! At best, I would think Anwar would handle the economy better. What your say, Zewt?

Hmmm... rather shallow view of what's going on... imagine living in Palestine 2,000 years ago... and going into a petulant sulk just because the fellow who claimed he could walk on water and resurrect the dead couldn't figure out how to escape arrest and detention... Pah! What kind of "Son of God" is that?
Catch my drift, Zewt?

I would love to see how abdullah gonna continue to make a further fool on himself if he doesn't step down...probably by ISA-ing Anwar.

Alternate Investment Group?? I thought it's American International Group?? Yeah, world's petrol price is down, but not here!!

I'm currently in >2k floating losses on Genting shares. Looks like I have to keep it for another decade and pray it'll never require a govt bailout, hah.

well. thats sad eh. our Malaysian politicians are full of shit. Even Keris waving khairy wants to stand up for the non-malays now.

he is feeling insecure from outside as well as within!

I don't think there was a Prime Minister/President of developing states in the modern time ever hold the Defense portfolio since Finance and Economy are of higher priority.

Give it a couple of days, those blue chips will taste better at a bargain. :D

hm, i dont think it's actually a good time to invest in stock markets just yet.
Suze Orman (reknown financial adviser in the US) certainly thinks so.

gotta let the current market wash out first, because there will be a few others that are going to collapse (US companies) so you don't know what's gonna happen in the Msia scene.

best to put ur money in the bank first until time is right.

where to put money? the bank also dangerous now haha...

I'm not sure bout M'sia, but alot of ppl in sg withdrawing their AIA policies..

You know, my sister and I talked about this... she thinks that he's taking his time because the last thing we need is a declaration of emergency, etc which will put everything we've fought for on the line.

You're right, every is NATO now, except for probably Zaid. :) On another note, I hope petrol price will come down!

Anwar gain nothing by lying to the entire nation. I believe he has his plan. We just gotta be patient. But the clock is ticking... for Anwar. He may get ISA-ed anytime soon if he don't act fast.

i just want someone else to be PM now.

Whatever the case may be... I believe the people of this country certainly wants change and ready for it, anything is better than what we have now.

As for the financial market. the bubble is bursting. Am weeping just looking at my investment losses. Arrgghh!

I'm a PR supporter. BUT, looking at the current situation from a neutral ground, DSAI's action of late really are putting a lot of risk to the whole country. BN government are also partly to be blamed because of the recent ISA arrest, who would reveal their plot to the enemies? If DSAI release the name list, then BN would just have to arrest 10-20 MPs who crossover and PR would lose it's majority again. The whole thing would go on and on until the only MPs attending the parliament when it reopens are DSAI and Abdullah Badawi :-P

Signatures arent enough to convince the KING, Anwar needs to MPs to declare in public they support change but none a willing to do so.

I would say Anwar was USED by the MPs.

Anwar Too Eagerness hit him again.

They're swapping portfolios because they want to start showing the transition of power before it actually happens. The PM has always taken on the Finance Portfolio and this recent action of swapping, indicates that Najib will be the next PM.

ohh time is certainly running out! look at the recent arrests n stuffs about people bluffing..ohh certainly their time is running out~

Dan-yel - definitely, and that is the main reason why many, myself included, supports him. it's all about the economy.

Antares - hello there, welcome to AZAIG. I must say, your analogy puts me to shame... i caught u there :).

sooi2 - yeah, it should be american. alternate is another AIG. hehe.... hahaha... genting shares are pretty stable. all u need is time.

HuntressMoon - that must be the greatest joke of all.

whoalse - well, the first comment there does ring a bell, no? oh... i am waiting for stock clearance sale! hehe...

pavlova - it's all about risk and you're right, the risk is still high now. but then again, you might just miss the wave :)

CK - hahahahaha... good point. under your bed is a good start.

Terra Shield - i cant agree more. better be safe... good for the people. besides, an amergency will not do him any good.

iamthewitch - we all hope that too. and then, force all the hawkers to reduce price!!

purple mushroom - yup, he is now being branded as a threat to the economy.... absolutely ridiculous.

frostee - true, we all want a change, no doubt about it. hahaha... i am glad i liquidated all my stocks when i got married.

NoBle - true... so technically speaking, it can only happen on 13 oct. or unless the govt complies to dsai latest demand.

Edi - it's all about the money really. u seriously think they hop becos of conscience? get real!!!! sigh...

huei - maybe they are all just co-incidences? :P

i would reckon you guys wait till the market flattens out before jumping into bluechips. there could be more sh*t coming :)

Zewt, so glad you "caught my drift"! Shows you have "mythic resonance" :-)

What's mythic resonance? It's the cellular knowing that mythology is really MYtheology - these stories of great men and women who have incarnated on earth to inspire, guide and motivate us towards our own ultimate destiny as divine humans ("My Father and I are One") can nourish our souls if we (1) take them very personally as our own stories; and (2) realize that time & space are holographic, therefore "illusory" (or only "sangsaric" as the Hindus say and as the Buddha taught) - which means the outer trappings are less significant than the emotional content.

Just as John the Baptist fearlessly pointed his finger at the corrupt & decadent Herod Antipas (and got arrested & beheaded for his efforts), RPK's beautiful bullethead head is now on the block. And was it not the Baptist who recognized, initiated, and baptized Yeshua so that he became The Christ (the anointed king)?

Well, it was RPK who in 1998 started the FreeAnwar.org site that launched Reformasi into cyberpace. Ten years later, RPK remains true to his spiritual alliance with Anwar - and he has publicly named Anwar as The One who shall lead us out of Darkness. I rest my weatherproof case! ;-) Cheers, mate!

Antares: He was hung on the cross to redeem our sin. So repent and be saved, dude.

where did you get the idea that AIG - Alternate Investment Group? :S

anomaly - the latest bail out plans from the states causes some rebound there...

Antares - yes, if RPK has chosen his man, i doubt he is wrong. let's wait and see. but yet, hopefully the waiting game will end.