It’s here again… the Chinese lunar new year (“CNY”). A time where a hole will be burnt in pocket of the married couples… 2 holes for those just married. Time for the exodus of outstation folks via a wonderful traffic jam while KL-ites enjoy a few days of relatively free-flow traffic. Lately, it’s also a time for the Indons and Banglas to roam the streets, making KL almost their own. But hey, some of these fellas actually have bumiputera status… ya’ know, the prince of the land. Maybe KL is theirs to own, but that’s not the point today. 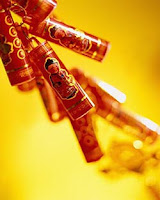 Anyway… I remember when I was young (which is quite some time ago), I really look forward to CNY and honestly, I have no idea why. Maybe it’s cos of the ‘ang pow’, maybe it’s cos of the food, but if there’s one thing I truly enjoy about CNY, it’s firecrackers. To me, this red explosive creation is the heart and soul of CNY. Imagine utter silence during CNY eve, and first day of CNY… really ‘potong steam’ and no atmosphere, don’t you think? 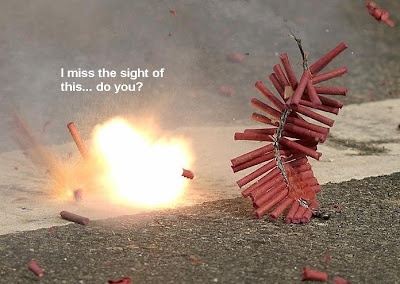 As you know, firecrackers are banned in Malaysia. Those caught trading firecrackers will be fined… and possibly jail term too? Every year, we read in the news about our cops busting this syndicate and that syndicate but Malaysians, being lynchpins in the you-got-the-money-I-got-the-goods world, somehow, there will be some crackers being light up here and there. So the latest step to curb this as reported in TheStar on 12 Feb, 2007 is:

“KUALA LUMPUR: Those caught lighting firecrackers for the coming CNY celebration will be slapped with an on-the-spot compound of at least RM100…” 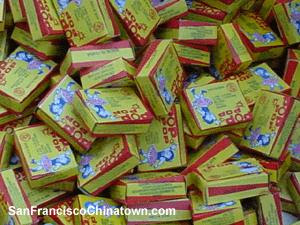 So what do the Chinese do during CNY? … play pop pop… I throw it at you… pop! You throw back at me… pop! Damn fun right?

If I remember correctly, the ban came about cos some freaking morons blow up their hands, their legs playing firecrackers. Most of the time, such incidents happened when these morons played this thing called ‘meriam buluh’ (translate: bamboo cannon). They stuff a lot of fireworks inside a bamboo, apparently the explosion is really cool. But these morons who don’t’ really know how to handle fireworks carefully have their hands, legs and face blown up while stuffing fireworks into a bamboo. Now tell me, who are these people that always play ‘meriam buluh’? Tell me! Tell me!…. And because of these idiots, firecrackers are now banned.

To me, the ban on firecrackers is really unfair. Because of these morons, CNY has lost its atmosphere, its heart and soul. It’s also unfair because the spirit of banning anything bad it is not unanimously applied. We know of these illegal racers and public nuisance called mat rempits, most of them are drug addicts and snatch thieves but does our government ban mat rempit activities? No! And not only that… they government intends to build tracks for them to race! And the latest news is that, they will be given free bikes if they ‘help curb crime’. Woooooaaahhhhh…. that’s unfu*kingbelievable!!!

Sorry to spoil your CNY mood but that’s reality, ain’t it? Alright, think I’ve rant enough. Here’s wishing you everybody a very Happy CNY and may you ‘fatt’ like a pig but make sure you don’t grow ‘fat’ like a pig… 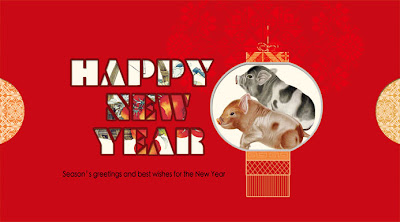 A zewtpinion by zewt at 1:06 am
Email ThisBlogThis!Share to TwitterShare to FacebookShare to Pinterest
Labels: Growing Up

Anyway, u think there won't be any boom boom? Let's see then :)

Re. the song, drop me a mail at angelsoo at g mail dotcom. Looked high & low but couldn't find yr email addy la...

Thanks for visiting and for dropping a line. And I see that you have done that a couple of times before. Thanks again.
You know, you are right. I remember Hari Raya used to be "noisy" too. We used to play firecrackers. It was really fun.
And of course, i do remember Chinese New Year and the firecrackers cracking away.
I mean, what is Chinese New Year without all that noise? Miss those times.
Zewt, Have a great Chinese New Year. Enjoy the "empty" roads. I know that I will get easy parking at my favourite haunt -- Bangsar Shopping Centre!

P.S: You do have an interesting blog! I'll be visiting you a lot!

you wana know the real reason? it's cos the "marchan" can't afford to play fireworks, so they get jealous of seeing us have fun, so they ban it alltogether.

and..another "skim cepat gaya", hey what better way to get that extra money than fine us? >.<

Gong xi fa cai
I guess we cannot do much
I believe in think happy be happy
Who cares what they do and well, for the smaller towns, let the crackers start crackling and booming
You have nice picture there too
:)
Happy Chinese New Year

A salute to you, Zewt for speaking your mind n exactly what I've been trying to put in the papers for so long!!!!
Oh well as long as we're in this country, if there's a will there's always a way eh..
Do drop by my hometown for the fireworks n crakcers if you have the time...it'll bring back the memories..

happy CNY bro! firecrackers being banned? who cares?! just find a way around it ;p

CNY, for me, isn't as interesting and as exciting as before. I guess the happiest moments was when I was a kid. New clothes, getting ang pows, playing fire crackers, gambling, all the cousins get together... etc. It's almost like another ordinary day for me now. But I guess I won't miss out on the red fire crackers. Back in Shanghai, they will boom-boom day and night. And I think ppl in KL will still boom-boom despite the ban... especially on the 9th day where the Hokkiens pray to the God of Heaven.

angel - ya, there're some boom boom bang bang as I am typing this, i guess chinese is a resilient lot... haha. thanks for the song, very creative of you all.

Nuraina Samad - Thanks for dropping by and it's an honour to have your presence here. I guess we have to enjoy the free flow traffic as much as possible but before you know it, they will be back. hope you have a good time at your fav haunt. happy holidays...

huei - yeah, there are a lot of skim cepat kaya here... sigh. and ya, maybe they are jealous... hahahahope you have your maxis broadband done up soon.

Maverick - Same to you... and hope you will get yout ACCA done real soon. Incredible that someone at your age still has so much energy.

zeroimpact - as I type... the kl folks are lighting it away... looks like we chinese just dont care... haha!

freelunch - so pop pop is fun to you eh? haha!

ubean - mahjong maybe tomm or the day after lor... that MK seems so damn busy la...

purple mushroom - yeah, kl folks are lighting away as i type... guess chinese are a resilient lot. i did something thinking today and i found out why i looked forward to CNY when i was young... hehe... maybe in next blog.

Have a Happy Chinese New Year, Zewt!
And enjoy the hols....

Traffic was baaaad @ Pudu area just now! And OMG... all those aliens lepaking/standing/crowding around the bus station and around Kota Raya... OMG! I've never seen a 'scene' like that before! If u are free, do go make some 'rounds' there haha... gerenti sure make u sked wan... :P

Happy Chinese New Year... i miss all those fireworks & firecracker too...

Happy New Year and take care on the roads.

angel - no need to go around kota raya, just go bintang walk and it's scary enough. anyway, kota raya area has long been the territory of aliens.

Yes, I do miss the firecrackers. Over here we held a CNY party with rolled-up fake crackers (which we had to fill out about a hundred forms, train fifty fire marshals and undergo seven health & safety inspections to get permission for).

Yes, me miss the pop pop too. The big ones I mean. In the sky? Oh, I see. They still have it? Eee-lee-gull-lee?

Guess not everyone's worried about the saman... :P

Gong xi fa cai.
Happy New Year to you.
Enjoy the peace and quiet, while it lasts.
And there were firecrackers and lion dancers near my neighbourhood.
Thanks for leaving all those comments over the holidays.
U're a real motivator!

No firecrackers, no CNY atmosphere!

Too late liao, already 'fat' like a pig, been whacking too many pineapple tarts!! :(

Happy prosperous piggy year to you!!

CNY is boring this year.. maybe because i'm getting old..

btw, it was such a surprise to see you the other night!!!

Let me try and make a case for the legality of firecrackers in Malaysia (for the Chinese at least):-

Local legislation: Malaysian Explosive Act (revised 1991) states that playing firecrackers is now illegal as a result of the increasing injuries among children (especially Malay) during Hari Raya festive season. (Would you agree with my hypothesis that it is only logical that we read into the spirit of this law rather than focus of the illegality of it? I.e. Ban it from one sector (race) cause it causes harm to only a particular sector (or race)).

Also, the other reason for the selective ban is because firecrackers are in the very core of Chinese racial definition, believed to scare off evil spirits (actually, its some big beast way back in the ulu times) and attract the god of wealth to people's doorsteps (I don't think the noise actually does that since its merely a celebration of His birthday, but lets not get calculative).

So, since Article 153 of the Constitution states that "It shall be the responsibility of the Yang di-Pertuan Agong to safeguard the special position of the Malays and natives of any of the States of Sabah and Sarawak and the legitimate interests of other communities in accordance with the provisions of this Article." and that "In exercising his functions under this Constitution and federal law in accordance with Clauses (1) to (3) (forget these, its the same gibberish about privileges) the Yang di-Pertuan Agong shall not deprive any person of any public office held by him or of the continuance of any scholarship, exhibition or other educational or training privileges or special facilities enjoyed by him".

Please re-read the part on shall not deprive any person of...yadda yadda yadda...continuance of any....exhibition (ignore the rest).

So, it is our Constitutional right that we (the Chinese) NOT get any protection from firecrackers!

pookyma - hahaha... never knew there's such a phrase in hokkien...thanks.

The Angry Medic - those were done with 'paint'... still working on the photoshop skills, brutha.

Kenny Mah - Indeed, we chinese are master of eee-lee-gull-stuff... hehe.

QueenB - I am? well, keep blogging then!

dy - hahaha... not everyday u see a fellow blogger. if you're old, i am what?

cirnelle - cirnelle, oh cirnelle... obviously you're pretty free... haha! Definitely, we have to read it with the spirit of avoiding injuries those always-injured children. And damn right we don't need any protection from those firecrackers. It's interesting to note that the crackdown on firecrackers is not that intensive during other non-CNY festive... as mentioned in niamah.blogspot.com!

Oh well, it's malaysia after all.

fire crackers are allowed here where i live... at the mo... so we were thinking of lighting the big one, but oh no better not cos the neighbours would b real pissed we disturb their dogs.... an absolute crime; so a quiet xin nian kuai le to u too.

Here, I do not really imagine it is likely to have effect.