Behind the economic scene

Almost everyone knows about sub-prime, but not many know how sub-prime led to the current economic state. Perhaps that is a story for another time.

Amongst all the chaos, I actually noticed something quite hilarious, if I may use such adjective. Really, it’s quite funny. Let me tell you…

How many of you noticed that America and Europe seem to be engaging in an I-am-better-you-are-worse argument? When America first plunged into the credit crunch, European economists came out with their guns blazing saying…

“America, this time you sure die already lor. This is a big pile of shite, you will never get out of this. Europe is going to conquer the world. America is going to die! Hahahaha!!”
(Metaphorically of course)

The very first article which I read about sub-prime was written by an economist from UK. The tone of this write-up was something like Americans were stupid, using a failed system, serve them right, etc.

Alas, Europe was totally unaware that they themselves were also taking in load of sub-prime poison and when they were officially diagnosed with the credit-cancer, it’s now the American economists’ turn to come out with their vocal attack on Europe’s economic condition.

“We the America is going to recover within a year. You Europe is going to die. Look, even one of country has gone bankrupt! Hahahaha!”
(That is the American economists’ tone now). 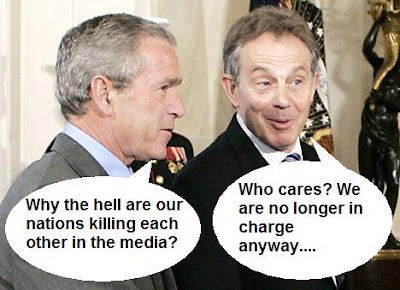 That is what I notice, and it is still happening.

I tell you, the Cina is really quite something. It’s like years and years of exploitation and being looked down bought the best out of them. They may copy everything but they have certainly put their resources to good use. I won’t be surprise they will one day rule the world.

And when I say Cina, I am referring to Cina from China, not the Malaysian Cina. Malaysian Cinas are trying very hard to lose their Cina-ness by not speaking their dialect, putting on accent, not eating rice, not celebrating CNY, etc. Maybe one day, when the Cina really rule the world, these Malaysian Cinas will come out and say… “Actually ah, I is Chinese”

Anything is possible in the world today.


1 year ago… What if this election impacts your rice bowl?… Some general modern slavery comparison…London cooking adventure

2 years go… Chinese A…B…C
A zewtpinion by zewt at 9:21 pm
Email ThisBlogThis!Share to TwitterShare to FacebookShare to Pinterest
Labels: In the news, Stupidity

This blog, themalaysianlife.blogspot, has posted some interesting video to explain the sub-prime crisis. Very easy to understand.

China will rule the world in this century. Haha! It's about time : )

not sure about ruling the world just yet....
to rule the world they have to clean up a lot of mess within the country's political scene.

even now, they are already in big trouble ( china). they are one of the major factors that caused Aussie's recession.
they might be in a slightly better state that US/ Europe, but their manufacturing industry is also bad at the moment.

China is financially much better off than US. But I'll still take my chances with US over China anytime if I'm an investor.

China might be big and rich, but they need US more than US need China. China has a BIG population.. but the people still lack spending power.

To keep their revenue coming in, China needs US.

"i is chinese"
lol

yeah zewt, msian cina is getting stupid n stupider by day, or shall i say confuse, with all those stupid so-call 'idol' drama, ptui!

we r losing all those asset/values as we discarding them like shxt
while down south under, ppl r rechargeing /importing back these values

hahahahha well i is chinese!

well china is successful..but..i'm wondering y on earth do i get super strong mandarin dialect calls asking me wut phone i use or whatever short interview crap =P

Aiya, if China rules the world then die lor, who knows how many similar food cases like milk tainted with melamine will happen then and nobody will know about it until babies or humans start to drop dead like flies. :-O

racially Chinese but culturally Malaysian.
Just like some Japanese who lived in Sao Paulo , Brazil, they don't even speak Japanese anymore and their names are brazilian than our normal keiko.. or kiko etc..

I would say that it is an evolution of the human race. Roots are not dead just advanced.

Yes i admit i don't speak my dialect - my shanghainese speaking is cacat.. but if i do know how to speak it.. who can i communicate with aside from my father?

Before the economic crisis, they always talk about stock market. Now they are quiet because they lost all their money in shares. But guess what is the hot topic recently? Yes. Properties. Shanghai property prices are darn high and recently it went down by more than 10%. They are all buying houses now. 1 of my colleagues, both my junior, have forked out RMB600k and RMB300k cash respectively as downpayment for the apartments they bought which worth above RMB1mil. OMgosh!!! I wonder.. they are darn cash rich!!!

LOL i like the write-up! :D
I'm proud to be msian chinese but i guess from now onwards i need to learn to talk with my mouth full blasting my rice to everyone around me, talk as if i'm screaming and eat the trishawmen style :P

Ya, last week Hillary was pleading with China to buy more US Treasury bonds, saying "it's a safe investment". But who really knows how safe is "safe" these days right?

On one hand, the US needs China's support to finance its stimulus plan by asking them to buy more Treasuries bond. On the other, it often blames China for its job losses (mainly via outsourcing) and a massive negative balance of trade. Even one of its own economist (a very famous one at that) said the President is sending "mixed messages" with his inconsistent policy.

So many people has been taken in by the world's first black president thinking he's going to save the world. Let's not forget a racist doesn't necessarily have to be white. And whose world would he save?

Some have said the President is a 'Manchurian Candidate' but i hope he's not. But let's not place too much blind hope either and watch what he does in the coming months.

the last statement, so hit the subang jaya spot... owh well, im proud to be a chinese and also proud to speak and take the language subject BC in SPM!!! MUAHAHHAHAHAHHA im no cowards like the kiasu chinese in my class who says, take chinese kenot get straight As~ how u know u definitely get straight As without chinese? dang u for a B in ur BM muahahahahah

seriously. i know some people who feel SO proud that they don't know how to speak chinese. i just can't get it. what's so proud about that?

I agree with zthon. I have some friends who came to shanghai and refused to utter a single mandarin. I don't understand why.

foongpc - that's why the americans are freaking out.

pavlova - i dont think they mind causing recession in aust though :P...

helen - and we think of us as gwai lo.

ScaredofChina - hahahahaha... we will move up the ladder la of cos. dont use those things...

Irene - shanghainese? wow... i saw that in a tvb series. well, seriously, dont let it die. it's a pity.

purple-mushroom - yeah, i worked in china briefly. i saw a girl, barely 22, got 90k in her account!!! and those friends of yours... useless! pathetic!

Sharon - hahahaha.. those things, we can do without.

joshua wong - i am sick of ppl thinking obama will save the world. his obligation is to US, not us. we must wake up.

Binn - hahahaha... they actually said that? blardy ball-less cina they all... hahaha...

zthon - these type of chinese are fast increasing in numbers.

on malaysian chinese - thats quite an interesting point too. though i think we should think malaysian first, before chinese :)

wakakkaa..cos my family speaks mandarin, canton, hakka..but not hokkien..i din noe i am hokkien till much later..

QuaChee - not many can think that way, particularly when we are made to think otherwise.