It is frightening when at the beginning of the day, our PM strongly denied that parliament will be dissolved today (13 February 2008)… 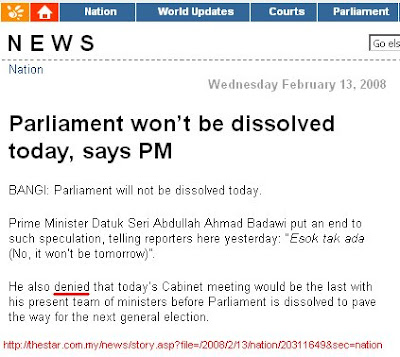 … only to make a press conference on the day itself saying the total opposite!!! 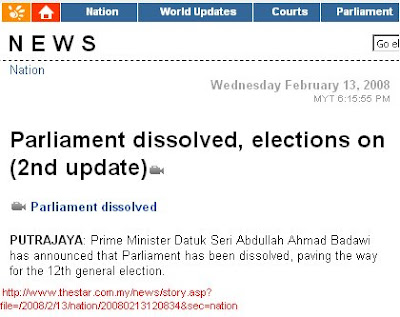 My fellow Malaysians; and friends from all around the world… perhaps I should not use the word ‘lie’ here; but making a statement only to reverse it within 24 hours is certainly not funny thing. It is a very serious matter.

Lest we forget, the man himself also denied finding new love only to announce his marriage soon after that. That piece of information may be irrelevant for all of us, but stating one thing and doing another in relation to the General Election is certainly very relevant to us. 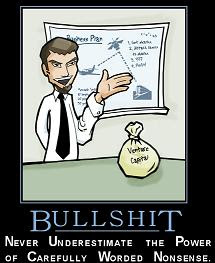 I don’t know about you but when I look at statements made such as I-will-be-fair-to-all… I-will-stop-corruption (ok, this one has gone bust)… I-have-rakyats’-interest-at-heart… inflation-will-be-controlled… I-will-do-this…I-will-do-that and all the nice promises mentioned, I can’t help but wonder how easy it is to reverse all these statements, if they have not been reversed already. And just to take it a note further… are all those lies? I guess we already know the answer.

A quick note to those who have been complaining and wanting to vote but failed to find time to register; you’ve missed the boat and you have probably miss one of the most significant election ever.

Some of us may see the bright side of it, i.e. this is truly the Malaysia boleh spirit. If you are one of them, you’re truly a moron. It is frightening beyond words living in an environment where anything is possible. I am sure we all want some certainty in some quarters; particularly in our future.

Being away, many have said that home is where the heart is. But if you think a step further, is home where your future is? Judging by what happened today, I can't really see it.
A zewtpinion by zewt at 5:15 am
Email ThisBlogThis!Share to TwitterShare to FacebookShare to Pinterest
Labels: Boleh-logy, In the news

I'm in Russia right now, will be here for another 1.5 years. it scares me what come out of this election, because once I'm done graduating, that's where I will be working for the rest of my life. And I am worried about the state of our country as we are in right now.

Hope to see come changes this time around...

Happy Chinese New Year to you, Zewt! Hope I'm not too late, was away for quite awhile.

we all know he doesn't keep to his word. he has so little credibility left that more often than not whatever are written concerning him and his promises are used to clean my family's doggie poo.

i lament for this nation indeed...

I don't see my future or my kid's future here in this place.

I also got a shock when I read about it yesterday. 这个人没得救了。

Hey Zewt! Yea, was just as *speechless* when the news came out...would you vote for a PM that's so..."undecisive"? (putting it mildly here)

10 hours ago by Maverick SM
But, Prime Minister Pak Lah had called for a Press conference at 12.30pm today. Will he prove once again that he lied yesterday, and most of the time? Will he give us another proof of his superb ability, the competency of lying? ...
Cakap Tak Serupa Bikin - http://maverickysm.blogspot.com/

Either something gets lost in translation when the PM is verbalising his thoughts (from brain to mouth) or the rest of the country is constantly misunderstanding him. Are we missing something here, Pak Lah?
Whispers - http://hushedwhispers.wordpress.com

Who's Telling The Truth - Dr M or Pak Lah?
1 Feb 2008 by KHER CHENG GUAN
“No such thing,” says Pak Lah. Malaysians. Which one of our PM is telling the truth? Dr M our former PM or Pak Lah our present PM? Probably one of them forgets easily. Or one of them is easily a liar. The question is: Can we handle the ...
Malaysian Cartoons & Quirkies - http://malaysian-humor.blogspot.com/

IS PAK LAH AN ANTI-CORRUPTION LEADER?
3 Jan 2008 by A. Ghani Ismail
That would make corruption in Pak Lah’s four years as Prime Minister larger and stronger than Ultra Man, but certainly not like Janus, since this corruption is one-faced and as blatant about the deviance as the Marquis de Sade had been ...
My Cardinal Point - http://mycardinalpoint.blogspot.com/

Pak Lah lies about abolishing school fees
21 Dec 2007 by no2umno
Pak Lah, please do the right thing. Don't preach one thing and do something else. As for the parents, I feel sorry for all of us as again. Our function is being curtailed by the ministry. Our voice are not important at the school level.
No2umnO - http://no2umno.blogspot.com/

LIAR, LIAR, PANTS ON FIRE.
31 Jan 2008 by akula
Pak Lah said, nope, they did not. What is this all about anyway? “Datuk Seri Abdullah Ahmad Badawi yesterday denied having a “gentleman’s agreement” with Tun Dr Mahathir Mohamad five years ago to serve as prime minister for only one ...
Nasi Lemak & Nescafe Tarik - http://akula69.com

Pak Lah Kesal
1 Dec 2007 by RasaKita!
Singling out Hindraf’s accusation that the Government was carrying out ethnic cleansing of the Indians in Malaysia, the Prime Minister fumed: “I'm really angry, I rarely get angry but this blatant lie cannot be tolerated at all.” ...
RasaKita! - http://rasakita.blogspot.com/

BUSTED!!!! Dude, even he's making a big fool of himself in many occasions, many many time, people still think he's worth the support. I am flabbergasted!

Yes, that's just what I thought. Why the damn secret? It's not like it's a matter of national security what? *roll eyes* There's no need to put ppl in the dark over the election date.

may this GE be the defining moment for all Malaysians... im definitely a "change agent"

恭喜发财! It has been a very very hectic month for me.

Anyway, just heard on the radio that elections will be held 8th March??

Like what everyone is saying, time for a change.......

well, finally the cat is out of the bag after months of 'speculation'. its about time they stop trying to deny it anyway. (buying time perhaps?)

i am most definitely going to vote in this election!

Well, this not a lie...and it comes straight from the heart! A Happy Valentine's Day to you, Zewt and Jules and may the two of you have lots and lots more in the years ahead!

zewt,
He will be remembered as the biggest liar of all PMs. Let's vote him out!

Hi bro, election is on March 8. Was your prayers answered? :P

that, people, is why we can never believe politicians 100%!!

I thought the Moral subject taught us not to lie, let alone lying without even blinking! Hmmmm.......

Talk about setting an example and Talk the Talk, Walk the Walk. it's more like Talking COCK!

**This also goes to those who said wanted to register to vote but ended up procrastinating endlessly!**

Guess what? I went to get registered and I told them I'm now overseas and if I should head to the embassy, they told me I'm not qualified to register. Doesn't matter even if I'm going to stay here when the election arrives.

Even voters are chosen.

8 march bro, hope you can make it, every vote counts as they said...

judging from ur views in this blog, i presume we are on the same boat :)

I have the same confuse feeling too. My godness, so contrast - even faster than women mood swing.
Hahahahhaa

I read the polling day is going to be on the 8th Mar, which is sad, I am having short trip on that day itself =(

For those who is here, dont forget to vote !

Aleckii - we are all worried. if you are overseas as a student, i think you can vote. but you have to register before this la..

myop101 - let's hope this election will live up to its expectations.

frostee - neither do i.

lingzie - yeah, denial is everything. you go vote girl!

zawi - unfortunately, i will miss this one... sigh.

poseidon - sometimes, it's the lesser of 2 evil.

whoalse - damn right about those procrastinator. and looks like you're right, i am joining you.

twisted heels - they know if you're overseas, you wont be voting for them.

lucius maximus - i am missing it, unfortunately. hope the rest can make it.

and do remember,
a Vote for BN is a vote for
Son-In-Law to carry on his plunder!

Deputy Youth AMNO,
Deputy FAM,
Next, PM of Bolehland is not impossible thanks to 'Tidak-Apa' attitudes of you and me. Make a stand now!

hmmm... what to do bolehland mar everything also boleh wan...

What I'm interested in is how you managed to get these two photos: before and after he changed his speech. Did you stay on the whole day on the Star online and anticipated that he would changed his word?

He can't even keep his words and yet claims to be holy and religious. I call that a LIE!

Coming back to Malaysia must be a real, i won't say frightening, contrast to your London visit. Enjoy the elections!

sunshine - it's not funny if you think a bit further.

bee ean - it was in the star website at the very same time. incredible eh?

His popularity has gone rock-bottom and I daresay this coming GE will be one of the most one exciting yet. You should be able to vote!!!!!!!!!

Assessing the situation, I dare say that his PR people are doing a poor job advising or preparing him in press conferences, especially with regards to the dissolvement of Parliament and the upcoming GE. Very poor crisis management skills.

gracieq - sources said he... forgotten about it...