The reality of reality shows

I recently had the privilege to have a conversation with someone who participated in a local reality show. Consider that we don’t really have that many reality shows here, I am sure some of you would have managed to guess which one. Yes, it’s our very own version of apprentice. I think it’s called The Firm or something.

Anyway, this person (let’s call him Jack), quit after 1 episode as the show was taking too much of his time. It takes 4 days of filming for just 1 episode. So if you don’t have an extremely understanding boss, no way you can make it. 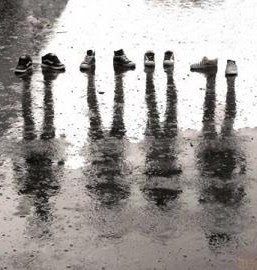 Jack response was… “It’s reality as in, there is no proper script. That’s basically it”

So, it’s just a show with no proper script? How do they generate all the drama and bitching and crying stuff?

“A combination of casting and editing”, Jack answered.

Apparently, during casting, the production team doesn’t really rope in the best people for the show. But rather, they cast in people based on their personality, personalities that will create the “drama” needed. I reckon it’s simple. Just cast in a jerk, a bitch, a dumb-dumb, a blur punk, an ambitious soul (both male + female), a joker and put them all in a group, you will have the reality you want. Don’t you think so?

It makes me wonder, whether we humans will one day move towards real killing. And you know what? It’s all in the name of entertainment…

Impossible? Too drastic? Well, what things are we not capable of?
A zewtpinion by zewt at 10:33 pm
Email ThisBlogThis!Share to TwitterShare to FacebookShare to Pinterest
Labels: Deep thoughts

same goes to Donald Trump's apprentice too? hmmm... i wonder...

real killing? that would be complete madness.

come to think of it, i think there are already people who enjoy watching other people die. They are known as Snuff films if im not wrong. Thats as close as it can get but who knows, one day a genuine snuff film might be made.

Zewt,
As long as there are buyers, there will be sellers. It is all business.

real killing...why not? it happened before....a long long time before tv, at places like colosseum.

That's true man, I never liked The Firm as it was too much of a rip-off. The Apprentice and other shows are also cast not based on qualifications but whether they're good onscreen (ever notice how the "villain" character never gets fired till late? They need him to keep the drama).

go watch "the day the earth stood still" abt human, the destroyer >P

There are already glimpses of demand for "real killing". Anyone heard of this show called The Contender?

LOL...I knew one of the participants on The Firm, as well as one of the "team leaders/bosses" equivalent of Donald Trump - and yes, everything was overly dramatised. They are nothing like what they were portrayed to be on the show.

Voyeurism at its best AND worst I guess...never underestimate man's capacity, whether it's to protect or harm.

Hmm.. didn't know there is a version from Malaysia. How was it? Must be bad... and who plays the boss aka. Donald Trump?

Real killing? Snuff movies? :) We don't have that yet. But for real suffering, pains.. The Contender will be the closest to what we get. Ahaks!

The main reason why reality shows were popular is because they were novel when they were first introduced and were extremely cheap to produce for the studios. Judging by the trends in the U.S., the fad has now passed. Reality shows will always be part of regular programming now of course, but it won't be completely dominant as it was once.

its all about the entertainment and money.

I just recalled something about the mob in Rome (roman history-la). The mob controls Rome, when the mob is entertained, you can do whatever you want.

So, if we're moving in that direction, are we no more than a mindless mob?

Or there are people who are sick of all these drama and so called (dumb) "reality shows" and don't watch them anymore...Apprentice, Survivor, Fear Factor, whatever it is, are so damn boring after (at most) a few seasons...

Why look for TV shows when you've more than enough drama in the real world with all these drama-queens, attention-seeking politicians, terrorists bla bla bla...Life's interesting enough without a TV.

Have you never read/watched Battle Royale??

zewt, merry christmas to you and jules. happy new year 2009 filled with joy and happiness and good health!

a bit far fetched i suppose..wat value do u put on human lives or bodies for that matter?

lately i found entertainment on tv sucks. i don't know. i rather lock myself in the room and read a book. or if its too bored would call up a friend and go out for coffee. talking about something good, side income maybe.

going to meet my friend this christmas at borders. need to find out more about paris to venice. by train is just RM160? that's cheap ;)

real killing? i don't think i dare to watch :D
but you're right. the entertainment industry is capable of anything.

bosscat - yup... it's all about casting.

ubean - ahhh... we are heading backwards... like how i think we are.

the angry medic - that's a good point... the villian is the one who is bringing in the ratings...

huei - which one? friends?

beetrice - i guess that's what they called good editing.

wankongyew - u think so? i think reality talent shows like american idols and the likes are really hitting the jackpot.

Rin - that is true... the internet and CNN have enough drama already.

constantly craving joe - there are some freaks out there... and a tad in us...

faisal admar - heading to europe for a trip i reckon?

zthon - not the entertainment industry... it's us... humans.

...please where can I buy a unicorn?