Between Egypt and us

When I attended a conference last November, I was seated next to a gentleman whom I have been exchanging emails in the last couple of weeks.  You would have guessed the content of those e-mails when I tell you.... he is from Egypt.
We are of the same profession and he heads a similar function of mine in a French electric company based in Cairo.  We kept in contact after the conference mainly because I would like to know more about the industry happenings in that region but the conversation soon deviated into what is now a global headline, albeit a brief period of mail silence due to a halt in internet service there.
If you do not know what headline I am referring to, you ought to put your head in a used toilet bowl and flush... might just clear up some blockages.
It was very interesting to know the perspective from a local, of which I believe offers a more un-bias view compared to deriving information from the media.
As I mentioned, my friend (I consider him one) is an educated professional who has a good stable career, possibly considered the upper class in Egypt... did he participate in the protest? The answer is a big "No". 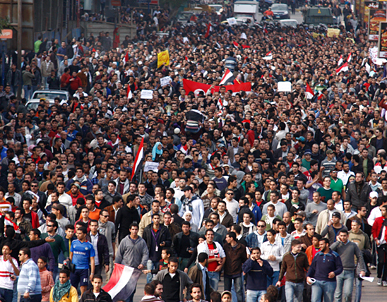 Just like someone in similar shoes in Malaysia, he has too much to lose.
Those who have taken to the streets, burned down buildings, destroyed the police stations, etc.  are those who are unemployed, those with nothing to lose.
Many people started flooding facebook statuses with statements such as "the govt should take note of what is happening in Egypt and beware..."... "PM, if you don't reform, what happened in Egypt or Jordan may just happen here"... etc. etc.
Will what happened in Egypt can ever happen in Malaysia? Definitely not... at least not in that magnitude.
Do Malaysia have a population of "nothing-to-lose"? Yes... however, a big portion of this population thinks that is it not that govt's fault that they are in such situation.  Worse... some of them think (or being propagated to think) that they are in such situation because the minority population has 'stolen their wealth'.
What about those in middle or upper class, those who drive nice cars, live in fairly comfortable house... those who have "too much to lose".... those like my friend... those the likes of you and me?
Throughout the ordeal, I asked my friend about the socio-economy impact but my friend never complained about the protest, he never thought about the impact to the economy, he never whined about the inconvenience caused by the event.
Malaysian in similar position of my Egyptian friend.... the very first thing that will come out of the facebook statuses of these people would be... "fuck the protest, I am in a fucking jam!". And that is actually a good sign because at least such people is aware of the protest... because I would think many will have statuses such as "OMG... why is there a massive jam, what is happening?!!??"
The racial and social demography of Malaysia makes it a little complicated to initiate such united effort.  The BERSIH rally was impressive, but it was only one off.  And it probably had more non-participating critics that support.
According to my Egyptian friend, the protest in Egypt gathers both participating and non-participating support. I just can't see that happening in Malaysia.
And just to close... my friend also specifically mentioned that the level of corruption and poor public service in Egypt has resulted in the collapsed of the healthcare and education system.  Sounds familiar isn't it?

But then... we all found through the highly publicised 1Malaysia evacuation that there were 11,000 Malaysian students in Egypt (possibly on govt scholarships). Such high participation in what Egyptian deemed as "collapsed" education system is... mind boggling.
2 years ago… An origination pick-up line
4 years ago… Respect for Malaysian drivers
A zewtpinion by zewt at 3:32 pm
Email ThisBlogThis!Share to TwitterShare to FacebookShare to Pinterest
Labels: Boleh-logy, In the news

WE have more in Indonesia,Bangladesh,Pakistan,
Turkey,South Korea, because those educated in England, Australia, New zwealand, Canada came back with fancy definitions of democracy that did not fit the Putrajaya definition.

My two cents, though, is that Malaysians will never fail to see the brighter side of life. No matter how tough the going gets, they will always fall back on a tried and true statement, 'At least Malaysia is not Cambodia.'

And that, in itself, will discourage many from taking decisive action. Nope. They will waddle and waver for as long and for as far as they can manage it.

It takes a majority to be able to overthrow a leader/government. Malaysia manage to divide the people according to beliefs and race...that's how a gov can control the country quite easily until now.

"... you ought to put your head in a used toilet bowl and flush... might just clear up some blockages."

It's sad to say that in the eyes of foreign investors, Malaysia is not in their option. We further destruct our reputation by having protest. My concern goes to the future of our economy.

It takes a majority to be able to overthrow a leader/government. Malaysia manage to divide the people according to beliefs and race...that's how a gov can control the country quite easily until now.

It was the majority that put the present system in place. Non-Malay migrants agreed to institutionalise Malay rights in return for Malaysian citizenship. Any and all corruption and discrimination is an outgrowth of that social contract.

The reality is that no one forced Malaysians to sign up to it. They did so out of their own free will. It has since become the framework of the country, and the government is an extension of that.

@John Ling: I fear Cambodians will say in 10 years: At least we're not Malaysia...

In a way, those 'migrants' who can afford to leave Malaysia will definitely leave for good. The 2 states that entered into Malaysia in 1963 shouldn't have joined in. Instead, gov made the locals from these 2 states are running away from their own homes and adding aliens from neighbouring countries to fill up the population. This is to gain power in the elections.

in malaysia. they complaints about poor public transport.then when the government want to built MRT, they dun want the station to be built in their neighborhood.

haha that's why our graduates are... eh.. couldn't find the right word. But it's true that in Msia there's less "nothing to lose" citizens and people like us have too much to lose if we were to participate in a protest. And that is why I think such a thing would not happen here because we are divided of race, wealth and personal interests.

There must be something wrong enough to bring such a change to an establishment. And if that ever occurs, I think any change -- for better or for worse, is better than no change at all.

John Ling - if comparison is the way to go... then will we ever progress. i am inspired to blog my next piece.

Kimmy - divide and conquer... we do that most of time here in singapore.

Jerine - malaysia is in a dillema... hard to make a right decision.

yileen - well, look at libya... and one can tell what would happen if malaysians want to overthrow the govt.