The cab ride to KLIA

The cab driver who took me to KLIA when I was in KL 2 weeks ago was quite an interesting character.  For a start, he spoke English with me.  As far as I can recall, I have never encountered any Malaysian cabbie who does that.  He may not be very proficient, but deserved 10 points for effort.
From the initial stage of the conversation, I found out that he used to work in a corporate environment.  Unfortunately, he couldn’t make it as he doesn’t have any paper qualification and his boss… “that bastard ahh… makes me work day and night.  But pay me chicken shit”.
He then asked me where I work and why I am going to Singapore, etc.  Naturally, the conversation led to discussion on brain-drain and politics.  That’s when he popped me a very straight forward question…
“Eh sir… you ahh… govt supporter or opposition supporter? Tell me please!”
I must say I was caught off-guard.  He asked me with such gusto, I had to pause and planned my words carefully.  Further, he had a special permit which allows him to pick up passengers from LCCT, a rare case.  I wonder if he was a connected individual or something.
But at the same time, I didn’t want to lie.  Hence… “I believe Malaysia needs a change” was my answer. 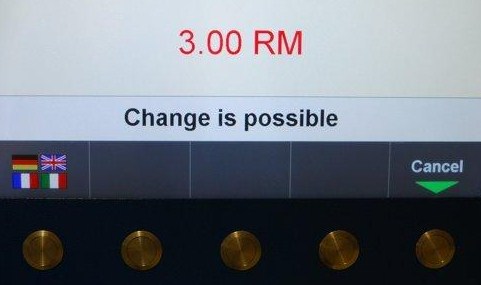 “That’s right sir! Actually ah… me and all my friends ah… my generation ah… all wants to change” – I reckon he is in his 30s.
It was then that he said something rather inspiring… I will never forget it…
“We all ahh… not very smart people, but we also know. If change govt, economy sure affected.  Maybe I will lose this permit to drive taxi. But nevermind… must still change.  For the future, we must change”.
He went on to say about life being tough but everyone must be prepared to suffer so that we can be better.  To me, that’s quite amazing.
Here is someone who is willing to risk what is possibly his entire income for the betterment of the nation.  But many out there are not willing to risk that simply because they are afraid that they might drive a Honda instead of a BMW… they might need to move from a luxury link house to a condo… that they might no longer be able to fine dine.
I guess when one has too much too lose… one will become selfish.
1 year ago… Professional world vs. Commercial world
2 years ago… Any difference?
3 years ago… Will you attend?… Don’t ever let this happen to you
A zewtpinion by zewt at 3:46 pm
Email ThisBlogThis!Share to TwitterShare to FacebookShare to Pinterest
Labels: Boleh-logy, People stories

inspiring. makes me reflect on what had I done for the betterment of the country.

yup. m saving some for my voting trip... which might very likely to be next yr i heard....

Most that have gone thru hardship will probably be able to endure some of those past difficult moments. It's those who have all those luxuries without going thru the same level of hardship that are more vulnerable.

"When the going gets tough, the tough get going"

Do you really think that's the reason why people don't want change? I never really looked at it that way... I thought they were just blinded, or something...

Ah, let me relate my experience riding a cab in Ipoh last Sunday. I got off the train ride from KL. An indian taxi driver was behind the wheel. I asked how the Barisan Govt was faring as compared to PKR. At that moment we were passing the UMNO building draped with a huge Happy Deepavai banner. He said in his 50 years he had never seen that. You know why this has happened! Because of Pkr. Must vote PKR again, he said for more changes to take place. Do you for a momement think the average man in the street cannot decide what govt. is good for the country? Think again and the next round will tell.

Zewt, I thought you will start to yell: Down with the government!!! :P But you were so diplomatic.

Anyway, the man's thinking is admirable, if there's more people like him, in 20 years you might see some change in Malaysia.

things nid to get a lot worse b4 they get better ... juz like u nid a forest fire to create new opportunities. we all are sick & tired of UMNO_BN's nation plunderings.

i don't think cabbies like things the way they are anyway..the last time i took a cab..the driver said he had difficulties trying to get a new cab! because apparently..i'm sorry i forgot the terms..he's not allowed to buy certain type of cars (something to do with the engine i guess)..because they're all used as patrol cars..i THINK. he has to be stuck to waja campro only that has problems with the gas tanks they use.

i can't remember the details..but the summary is..they restrict taxi drivers TOO MUCH..n they're limited to proton cars only. i think most of them want things to change too

I am not afraid of difficulty of the opposition totally win..what i am afraid is half-half, that is when they will use the half they win to kill us who votes for opp, they will make us suffer with the little power they still got...so if want change, make sure its TOTAL, not half-half..u got what i mean ?

Good anecdote, Zewt, inspires hope in the wisdom of the "common people" to see beyond their rice bowl. Those who continue voting BN just to maintain the status quo are no smarter than monkeys with their hands caught in a narrow-necked jar because they're too greedy to let go.

What a great post. So good to hear the views of another common people, even if it's just one man.

Salute to the taxi driver for his enlightened thought of the situation. i hope that many more people share his views.

We change our perception first. Only then would we be able to effect the necessary change. The taxi driver could perceived that one must suffer first so that things will be better for all of us.

thoughts to ponder... it is so true in a way tho... specially when this entry came right after ur previous post...

probably because the losing end is greater for some others out there. This cabbie might loose his taxi permit that earn him thousands but some biz man out there loose millions and that's why they didn't want a change.

we need a change vote for dap and pkr.

zewt why u dun reply the previous post...u usually will reply de ;[

My regular cab driver is much the same, has nothing good to say about the garmen..and nothing much to say about our Transport Minister as well. Go figure ;)

I hail the taxi driver for telling the truth and showing his true character as a real Malaysian!

I'm proud of people like him, not well-educated but they know what is right and wrong and more importantly, doing the right thing instead of bitching about things over and over again, but being the kiasu kiasi one.

Everything can happen in Bolehland it seems. The recent fuel price increase and sugar price increase just proves this. The age old statement that fuel is still cheaper than any other country does not pass muster as wages have not increased to keep up with the hikes to staples! Fact - As long as BN holds power, as long as it is written in the Constitution that only a certain "race" has special rights, things will never get better.

Open my mind with the article.

If a simple everyday man trying to survive can understand the simple logic of changing for a better future even if it will affect his comfort zone, then what is to be said of the new generation today who are more privileged and has the worlds' info at the tip on their fingers.

To let go of fine dining in exchange for a good cup of teh tarik or coffee at the local mamaks/kopitiams..hmm, sounds excellent any time.

Here's to yamcha! And change!

Hilman Nordin - i am sure u have done something bro.

storm - i will definitely make my way back to put the rightful X.

whoalse - oh yeah... and amongst the urbanites... hardship is disappearing.

Terra Shield - both... blinded as well as fear of losing the security.

peteray - hi there... agree, an average man on the street will be able to discern. but those not-so-average but above average men... they are the ones i am talking about.

MKL - yup... i am sure there many more like him... but the population is dwindling.

pinsysu - couldnt agree more... but many are afraid of the 'get worse' part.

Yvonne Foong - yes, and where possible, raise some for others too.

Huei - well, the taxi industry is controlled by cronies, and they make it in such a way that will squeeze the drivers. in return, the drivers squeeze us...

Antares - sad to say, rice bowl is all people care about. some with valid reasons... some, just pure greed.

joshua wong - indeed, our perception must change. and even amongst those of us who are prepared for change, we have our very own perception, which needs to be aligned.

eiling lim - and which end of the spectrum are u?

UnkaLeong - but do they have anything good to say about the oppo?

SK - i guess education corrupts a person's mind... in a certain manner.

Mireballe - fuel is cheaper than other country? i think that is the biggest lie ever, even when fuel was below RM1.

ngy - and we shall all go yumcha when the country is safe to roam in the middle of the night :)

Goodness, there is a lot of useful data here!