Slightly more than 2 years ago (before I moved to Singapore), me and a bunch of friends made our way to Singapore for a sports event.  A friend of mine brought his girlfriend along.  For the girlfriend, it was her first holiday trip out of Malaysia.
No, my friend was not dating a young teenager.  But rather, she is from a not so well to do family which limits her opportunity to travel overseas.  Ya’ know, not everyone has the luxury to trot around the world and post pictures of such trotting over facebook. 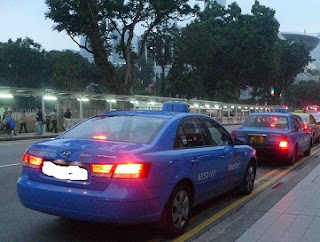 Anyway... It was after a dinner function and me, my mate & his girlfriend with another mate wanted to go to Orchard Road.  We hailed for a cab as we saw one coming.
As it stopped, I opened the door and immediately got into cab, only to realise that there was a little commotion taking place between my other mates and the girlfriend.
Do you know what happened?
My mate’s girlfriend was in complete shock that I just jumped into the cab without telling the cabbie where we wanted to go, obtain an agreement from the cabbie that he will take us there and succumb to a cut-throat price.  She could not believe it, to the extent that she didn’t dare to get into the cab in that instance – needed some convincing.
You should have seen her reaction and what she uttered out in Cantonese – it was quite hilarious.
Later on in the trip, she continued to be shocked by the fact that public buses and MRT are on time… public toilets are clean… there are hardly any potholes on the road, the list goes on.
Let’s not term this as “katak bawah tempurung”.  Like I said, some people are just not born into a fortunate family which allows them to occasionally jump out of the “tempurung”.  And hence, for these Malaysians; who grew up in such environment – these people are abused by mediocrity without them knowing it.  Mediocrity is not a choice, it’s just the way it is for these people.
The first degree of mediocrity… is when mediocrity is not known to be mediocrity.
The second degree…
Look into the mirror, chances are you will see one who falls within this category.  Ya’ know, those of us who are fortunate to know about the outside world due to the luxury of physically jumping out of the “tempurung”.  Such luxuries which give us the opportunities to realise that the room for improvement in so many things are huge.
But so what? We know things suck, and we just don’t give a damn.  We are used to it.  Mediocrity is a lifestyle.  As long as you’re in Malaysia, it’s expected and accepted.  We live with it.
The second degree of mediocrity… is when mediocrity is normality.
The third degree…
This was quite some time ago and I was travelling in a cab in Malaysia.  Yup – the one where I have to tell the cabbie where I want to go, get an approval from him and be screwed in terms of fare.
I like to talk to cabbies – always an enlightening experience.  And so, our conversation flowed from food to new roads being built to traffic jams and ended up with cars.  Proton came into the picture.  To cut the long story short, I made a comment about the infamous quality of Proton’s power (or powerless) window, to which the cabbie responded…
“Kenapa orang sering cakap pasal tingkap Proton?  Mana ada tingkap kereta yang tak rosak lepas setahun?  Saya dengar tingkap kereta Jepun pun rosak selepas setahun.  Ini hah (referring to his Proton)… tingkap yang masih ok, lebih setahun dah.  Ini hah Proton lebih baik dari kereta Jepun!”
[Why do people often talked about Proton’s window? Are there power windows that remain fuctional more than a year?  I heard Japanese cars’ windows will be spoilt after a year too.  This Proton of mine, the windows are still fine after a year. Proton is better than Japanese car!]
I soon realised he was not being sarcastic.  He was serious.  I was not against him defending Proton – but was astonished that he actually believed that Proton was better than any other car out there.  The conversation continued to flow and this too came from him… 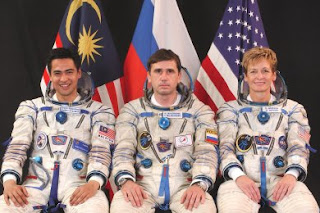 “Negara kita ada angkasawan!  Negara lain mana ada.  Indonesia ada? Singapura ada? Thailand ada? Ini bermakna Malaysia lagi hebat dari negara lain!”
[Our country had an astronaut.  Other countries don’t.  Does Indonesia have one? Does Singapore have? Does Thailand have?  It means Malaysia is better than other countries!]
I do not know whether I should shatter the cabbie’s pride.  Actually, I reckon I can’t.  He was really into it.   I can only pay tribute to the effectiveness of propaganda. And believe me, there are actually quite a number of people out there who falls within this category.
And hence, the third degree of mediocrity… is when mediocrity is believed to be superiority.
A zewtpinion by zewt at 9:47 pm
Email ThisBlogThis!Share to TwitterShare to FacebookShare to Pinterest
Labels: Boleh-logy, Zewt on Life

One observation, shouldn't you at least hold the door for the lady to get into the cab first?

regarding your third mediocrity - perhaps that's what the government had been doing very well since years to achieve! :)

Owh well, there are really these people out there. The mate's girl friend and the cab driver.

Of course, sometimes I do fall into the mediocrity of such sometimes, geez i don't even know what's A&E when I'm suppose to be a med schooler soon, and well as Malaysians sometimes we are too immersed into our daily problems of critics and comparison inter or intraracially.

yet, as for the cab driver, normally i would just shut him up with my long lost hard facts in the untouched folder of my hard drive. They've got to know these stuffs man. Reality hurts, all the time.

hmm. and u decided to write abt this after u got out of malaysia? its been like this forever. u ever ask urself why anybody would take that long to ask that question?

its easy to criticise when u dont live here. whatever.

@zlkmhd : Zewt has been writin about these issues wayyyy before he got out of Malaysia. Don't be so quick to judge base on this one entry if you have not been following his blog since day one. Do your homework before you criticise other people for criticising!

This has to be one of your best post in a long while. There must be lots of thoughts put into it to come up with that observation.

You take care ya.

The last line says it all.

what crap from a sinocentric mutt.

how about a 4th degree, of enlightenment, where we realised what we are & have been all these years that we try to move to change from mediocrity to fairplay, good governance & transparency?

haha you only want to believe the taxi drivers who spout your negativity..

why not drive a taxi and spout you home grown grouses to all the tourists..

guess you fit the bill..

@taxidriveby: clearly you are not a taxi driver when you say it's an easy job. no paperwork and all that crap. since if it's so easy, then go become one instead of being a sour grape.

As they say, things not within one's control, embrace ; and things within control, try not to slack . . .

and unfortunately, the last cabbie drive made up a HUGE majority of the Malaysian in numbers now. with the gerrymanding, it's a HUGE obstacles.

I assume Malaysia is still on track to becoming a fully developed country in 2020?

Zewt,
i was working in singapore and was recently back in malaysia to work and to rest.. i cant help but think that you're right about the acceptance of mediocrity amongst the ppl here.. i cant wait to get out again

n the cab driver..will be one of those wearing red this weekend! hahahahh

omg this is seriously hilarious..to actually see someone believe the nonsense of the gov! i wonder if he thinks the stupid 1msia email is worthy..or that 1.8mil for a fb tourism page thing. ptui!

I am such an FB-addict that I was actually looking for a "like" button here. I love the 3rd degree of mediocrity.

Phooowoar : And hence, the third degree of mediocrity… is when mediocrity is believed to be superiority!

What a classic line!

Dude, these are my pet peeves!!! I'm always going on and on about these!

The problem with most Malaysians is that they have never travelled, or even if they do, they stick within the confines of their comfort zone without exploring much.

Hence, they never know that things in their world are mediocre. That being said, my travels have also helped me appreciate Malaysia.

BTW, I drive a boring old Jap car. It's been 7 years and the power window works perfectly fine.

I did know of a few good engineers working in Proton. They have since left due to disillusionment. The power window issue is not due to engineering incompetence as it is outsourced from another company.

The problem lies with this other company, which is a crony of the government and thus, Proton continues to give them business in spite of the obviously inferior quality of the power window mechanism.

I think she's not use to the ' nice ' treatment act here , in her own homeland .
BTW - iz it important to eat roti canai in space ? What a waste of tax payers money - yours and mine(

Johnson Tee - added to my post page but somehow, not showing... dunno why.

Tempus - i think we should try to educate those in 3rd degree. those in the 1st seems to be receptive...

zlkmhd - i have always written about such issues since the longest time.

joshua wong - been a while... sort of lost the fire... wonder if i will pick it up again.

STEEST - indeed. i wonder if it can be fixed.

doc - yeah, that would be a good degree to be in... the enlightened :)

taxidriveby - i can't seem to tie in your points, if you have any.

CK - yeah, and it's scary that the next generation of malaysians will be groomed to think in such manner.

Tunku Halim - honoured to receive such a comment from you...

Tsu Forest - i can actually put it in but somehow, not showing. dunno why.

Crankster - yeah, it works both ways. but guess we have to cherish the good and change the rotten. about proton's power window, i heard of another version of the story... not to be shared here :P