The speech I made

This is the speech I made yesterday. When I was on stage, I didn’t really follow what I have written as I need to follow the reaction of the crowd. Hence, I have edited it to fit into a blog environment:-


I don’t know about you but when guys come together, typically, we always have a particular code to refer to a particular type of girls. One code which me and my mates once used was “environmental friendly”. It basically refers to girls who dress in very little material. Ya’ know, less material, less harmful to the environment. Or so we thought.

Then there as this time we decided to disclose our ‘code’ to a girl and after telling her and laughing about it she looked at us as though we were a bunch of morons. Do you know why? She enlightened us that using more fabrics doesn’t result in more trees being chopped down or damage the environment in anyway. So for years, we have been using and laughing at something that doesn’t make sense. Quite stupid isn’t it? A girl has to correct us guys on the kind of code we used to categorise them.

You bring your own paper bag when you go marketing but then you buy plastic containers and styrofoam cups for your parties, maybe because they are cheaper. You put your air-cond to a timer so that it will switch off by itself after you fall asleep but then you leave your computer to download stuff. What stuff? I don’t want to know.

It’s human nature really. We are only willing to go to the extent that it will not affect our pocket, our needs, our lifestyle. When it costs money, when it creates a hassle, we most probably will not do it. And that is our very own version of ‘Inconvenient Truth’. By the way, many of you have watched the movie right?

Please bear in mind that watching the movie does not amount to any effort in being environmental friendly. Some people have this mentality… what’s your contribution to the environment? Oh… I watched the “Inconvenient Truth!”

Have you heard of this saying… it’s very famous amongst the Chinese. It says… if a problem can be solved with money, it’s not a problem. And consciously or unconsciously, we are all adopting this motto in our daily lives, including this going green effort.

The earth has already started its journey towards a condition whereby one day, humans will not be able to survive in it. Be it too warm or the air is too toxic. Soon, there will be green spots on earth where humans can only survive in these specific areas. And these areas, will eventually only be available for the rich and powerful.

Besides ‘The inconvenient truth’ and ‘the 11th hour’, I have also watched quite a number of other environmental related documentaries. As you know, they always interview scientist, environmentalist, anti-pollution activist and the lot and do you notice one thing? Do you? I don’t know about you but I observed that 95% of all these people who are very passionate about saving the planet, 95% of them… they very quite old. Maybe 50s and above.

What does that tell you?

To me, it shows that the ‘older’ generation cares about us. They may or may not be around to face the full repercussions of the wrath that the environment is going to cast upon us but they still care. What about us? What are you going to do? 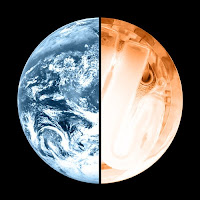 To close, I just want to quote what my pastor used to say… in fact, he quoted it from somewhere else but I couldn’t remember the name. Anyway… he said by preaching his sermon, he will not change the world, but the people who listen, will. And today, I don’t think I have done enough to change the world, but after you’ve listened to my ramblings, you will.

Thank you.
A zewtpinion by zewt at 10:50 pm
Email ThisBlogThis!Share to TwitterShare to FacebookShare to Pinterest
Labels: Save our earth

Meanwhile, let me leave the PC on to download...erm..."The Inconvenient Truth". :D

wah, so nicely written...i'm sure listening to it will be much more fun! it's like there are some humor in it yet it's the truth...

if it doesn't change the people, the least it could do is to trigger the mind to think about it .. the least that is

i hear you dude.

and i do agree with Klaw. RM4/liter on petrol. hell yeah i bet u this cunt tree's gona say they're being 'environmental friendly'! haha

yeah..i watched the 11th hour too and I remembered a professor did said about that...it is our attitude that will reflect the survival of mankind. quite scary eh to see one day all of us will vanish into thin air...but the earth will recuperate itself...

i definitely hear u!

There is no hope. We are all capitalist here. Greed for wealth will always overcome compassion for mankind. The world has to become worse before it can become better.

Nevertheless, we should do whatever little we can.

Well, more fabrics means more energy used in manufacturing processes, so it is still not 'green'.

I have mentioned it many times and I will repeat:
The best way to save the planet is to slow down the population growth!

Get ready to use contraception. Now I know many Christian churches are against this practice.

maybe pollution and global warming will slowly cause us to evolve back into a single cell...where life would be much simpler. =)

on a more serious note, i think you are right. the younger generation must be educated and i think its high time you form an activist group to push the education ministry for an environment sustainability subject to be introduced throughout primary and secondary schools.

talking abt girls n lack of materials..theres another saying..

making a speech is like wearing a bikini..the less cloth (points) the better but enough to cover the essentials..

to be honest, going green most of the time doesn't hurt your pocket.in fact, it saves u money.
something as simple as turning off lights and switches just needs to take one extra effort, but saves u hundreds of dollars at the end of the yr.

someone says it takes 21days to change a bad habit into a good one.
so perhaps might have to endure that many days, but after a while, it just gets natural.

for instance, now i feel awkward without my reusable shopping bag for groceries.
but i guess it takes a society's effort to encourage this sorta behaviour.

Great presentation, Zewt! You do deserve that PSP, alright. :P

I just received an email about some gentleman who has been making prophecies and so far, they have all come true. He prophesied that there will be more natural disasters such as earthquakes and tsunamis and by mid-Nov of 2015, the average temperature of Earth could be as high as 59 deg C. I think I'm going to post this article. Sounds bizarre, huh? We shall see, I guess. In the meantime, let's all do something for our blue planet. It's not like we have somewhere else to go!

after tonight RM2.70 a litre...lifestyle will change abit :D

P.S. Are you environmentally-friendlily dressed? LOL!!!

i think litter bugs should read your this post. imagine nowadays kids litter everywhere instead of rubbish bin. and their parents encourage them to do so... gosh, what has happened to the save the world instinct.

Lynnwei - the real speech has got more humour :)

cibol - and that is what AZAIG is all about, isnt it?

missironic - yes, my friend said, the earth will heal itself. that is after humans are extinct.

Asme - it is sad isnt it, that ppl will only change then we're at the edge.

khengsiong - nope, not my church hehehe... and you are right. slow down population growth. something the author from the history of current sunlight suggested.

constant craver joe - hahaha... where did that come from?

pavlova - i think it's about going out of our comfort zone, something not many is willing to do.

Happysurfer - yeah, i got that mail too. i would rather not read too much into it. but it's still interesting to see what happen in july...

kyliemc - good point... we dont really need to. i think a fan is better... good for the complexion too!

haha.. i have no idea what i've promised you. lol.. whoops..

but rm4/litre = EVERYTHING ELSE WILL HIKE! so dun nid eat lah..i can't afford that oso now T_T

I think going green is something that everyone can agree is a step in the right direction toward building a better community, and laying down the foundations for which future generations can successfully thrive in a healthier environment. Plus, I think many businesses will benefit from going green, not only building a more acceptable public persona, but in the long run it really helps companies save money and be a positive contributor to the world we live in.

Another thing I want to talk about is bioheat, it’s just one small measure that people can take in order to start living a greener lifestyle.

Did you know that if everyone switched to bioheat we could conserve 400 millions gallons of regular oil. That's a huge amount! I wish everyone could see the light. I would love it if you would check out the site on bioheat to read more background info on it. The other thing I love about it is that it's completely clean burning, and is comprised of a b5 blend of vegetable and plant oils such as avocados, hemp, corn, etc. Check out the link! http://oilheatamerica.com/index.mv?screen=bioheat PS I work with Nora to bring this info to you!

betty - hey there. welcome to AZAIG. bioheat it is. will do a read up and see if i can promote it here.

Thanks for that Chinese saying about if it can be solved with money, it's not a problem. I understand the Chinese (M'sian or mainland) much, much better now!

KittyCat - hahaha... is that sarcasm?