A fitting end to a brilliant season

The Chelsea fans are saying that Man Utd was lucky to win. Excuseeee me! The equalising goal from Lampard was like lady lucky flashing her entire body to him! Fair enough, 2 shots hit the post. But Tevez missed a sitter and Terry cleared off the line too! 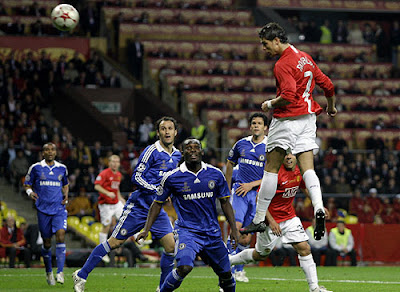 In all fairness though, I think a penalty decider doesn’t really portray the true picture of any match. Well, that’s football I guess. 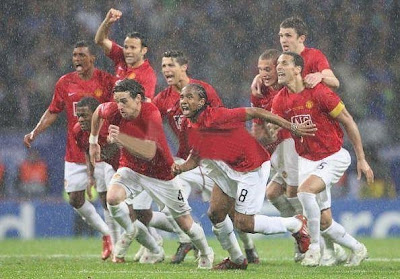 When I sarcastically asked an Arsenal fan “Who is playing in the Champions League final?”, his answer was there Arsenal is sending a representative from London. I have to say that was a good comeback line. But then again, too bad… London representative just not good enough. 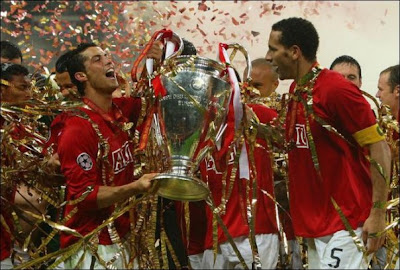 Of course, how can we forget about those historians aka Liverfools. Immediately after the match, I got a sms from a historian telling me that Man Utd need 2 more to match them. Sigh… these people really leave me speechless sometimes. 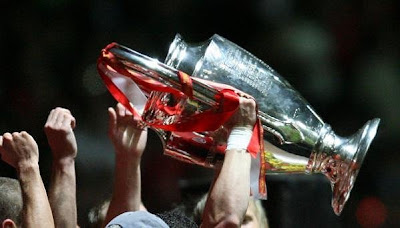 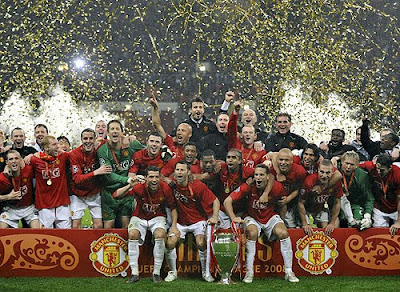 To the next season!!! Man Utd rulezzzzzz!
A zewtpinion by zewt at 3:33 pm
Email ThisBlogThis!Share to TwitterShare to FacebookShare to Pinterest
Labels: Sports

*turns a deaf ear to every anti-ManUtd dude*

Liverfool fans will always live in past glory :D

...only sad thing was that I am now having a nasty running nose and almost lost my voice that I could not even shout in euphoria! Bummer!

Now I'm sure if the result had gone the other way, none of those people would have half as many comments to make about Chelsea, right? They're just jealous. Ahahaha.

I agree!!!! Some Chelsea fans started to blame the PITCH what with it not suitable and all.

haha! ManU rules!!! legendary is still a legendary,no one can be that until miracle happens! LOL! AIG rules too!!! (coz i m an AIG agent)

I'm with Arsenal but I have to say....MU deserved to win. They had that quality...Perhaps Wenger should work harder next season.

OMG...last night they were watching outside the hostel...midnight!! so loud! but yea, yay MU!

Uh-oh, guess Hubby will be down as he's both a Liverpool and Chelsea fan!

I'm such a good wife (grins)

that's what we call = living in denial! hahaha..

hahaha..im not really a footie fan..but i do noe some Man U fan frens and yes, they r all burst wif joy over the victory..Congrats Man U!!

hmm..abt the liverpool fans..u're right..they sure got something to say back..ysterday i just for the heck of fun told my fren who is a liverpool fan tat Man U won..he said he dun like it..lolz..and then later on he said..is ok..Liverpool won the league in 2005..hahaha...

i find it pretty amusing when see these fans bickering at each other..well minus the throwing chairs and turning tables of coz..=P

Me also got sms said that man utd shud thanks anelka for the penalty ..fuck it! van der sar saved the ball la! yup..sms from the wankers historians.

next season we send ballack to hell again!

Zzzzzz...!!!! I think I prefer the post on football on danielliew.com. U saw that, zewt!! Hahahahahahahaha!!!!

Should thank Chelsea for missing the shots. Hehe...
Man U deserve to win. They've worked for it. :)

wat can i say.. arsenal will bounce back, i m sure..

Jemima - must win more to silent those historians.

Doulos Lee - missed out on the treble... could have made it a second treble.

pablopabla - hahaha... u must be out watching somewhere.

rinnah - hahaha... they are already saying united was lucky. sigh...

Sam - blame the pitch? hahaha... that is quite somthing. so you're a footy fan too!

Pickleman - i still think the rot began when patrik viera was sold.

Lynnwei - hahaha... you should have gone to the stadium la!

KittyCat - u remind me of one of my friend... she support whichever team the bf supports. so she has jumped from liverpool to man u to arsenal.

missironic - liverpool won the champions league in 2005 you mean. yeah, football can turn fans into foe and vice versa.

Huei - u dunno what you're missing hah!

j or ji - next season... ballack may not be around anymore. u know roman la... he cam main computer game.

jessbabe - hahaha... out and about that night i presume.

suituapui - let me go check it out later hahaha...

pinknpurplelizard - hey there, welcome to AZAIG. well, chelsea should also thank ferdinand's back for that assist for lampard's goal.

constant craver joe - i am sure, but how high?

Now I know your true color. Just let those historians continue to live in the past!

Hahaah, for me anyhow also alright.. so not into football. I just tumpang happy for my friends who are for Man Utd.

Yeah, UM, they are good but I just don't like them. i prefer the underdog, the other manchester that ends in city.

jessbabe - the town was painted red, you're probably one of the culprit.

whoalse - should have been MU! heh heh...

missironic - haha.. but we are still friends i am sure.

alan zed - hahaha... sorry, you have to suffer loss :P

Beware you Gunners and Blue Hypo!!!!